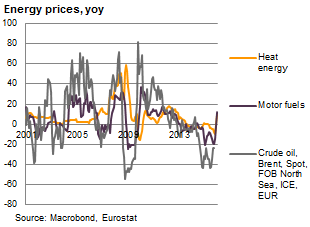 Food prices declined by 0.5% in Estonia in 2015. Food prices decreased around the world for the fourth year in a row in 2015, in USD terms, according to FAO. A decline in food prices by around a fifth last year was caused by abundant supplies in the face of a timid world demand and an appreciating US dollar. A hike in excise taxe rates lifted the prices of alcoholic beverages, which had the biggest positive contribution to the CPI in Estonia in 2015.

According to our estimates, in 2016, consumer prices are expected to grow by around 1%, of which 0.7 percentage point is a direct impact from higher excise taxes on alcohol, tobacco, motor fuels and natural gas. The prices of services will be pushed higher by a rapid growth in wages.