Economic growth in the last quarter of 2016 was above expectations

In the last quarter of 2016 Estonian economy grew 2.7%, which is the highest quarterly growth rate in two years and was above our expectations. Unfortunately the main contribution to this growth still came from private consumption whereas contribution of investments remained negative. Investments grew only in the second quarter and thereafter plummeted again. This means that 2016 was the fourth consecutive year in a row where investments decreased.

In 2016 ITC and domestic trade sectors had the largest positive and agriculture the largest negative contribution to GDP growth. Negative contribution from agricultural sector comes from a 30% decline in value-added as crop yields compared to averages were better in 2015 and worse in 2016. In the last quarter of 2016 economic growth was relatively broad based with only a few sectors that contributed negatively.

On a positive note export growth in 2016 was 3.6% compared to -0.6% decline in 2015. The contribution of net export to growth remained negative in total, but in the last two quarters of 2016 export growth has been stronger than import. This implies that Estonian exporters are gaining strength, although export growth in the last quarter of 2016 somewhat decelerated. 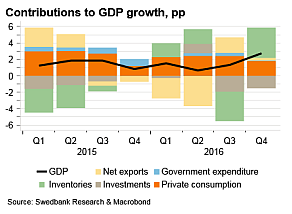 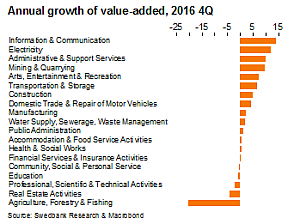