In September, the fall in consumer prices deepened from 0.9% in August to 1.1% in September. Food prices increased less than before as the prices of vegetables declined. Food prices are relatively high, compared to incomes, in Estonia, amounting to 95% of the EU average (2019 data). 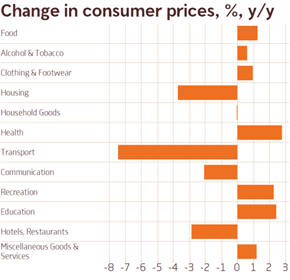 Consumer price index was mostly affected by the fall in transport prices in September. The price of motor fuels decreased due to the low price of oil and the decline in excise duty on diesel fuel.

Housing has become cheaper, too, because rental prices have decreased due to larger supply of rental apartments now that the movement of people across borders has declined (tourists, students, foreign workers). In addition, electricity and in some areas also water supply has become cheaper. The number of apartments sold has recovered, reaching the level seen one year ago. Apartment prices continued to increase in September. The average price per square meter in Tallinn jumped by a tenth, over the year. 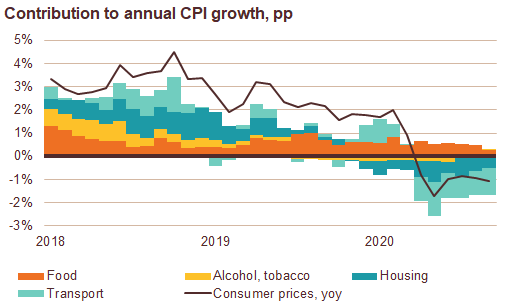 Deflation in Estonia is one of the largest in the euro area, partly due to lower excise taxes and the abolition of different fees/prices on public services (public transport, childcare) during the lockdown. In September, among the euro area countries, deflation was larger only in Greece and Cyprus, where the economies have suffered more (and tourism sector has played a bigger role) than in Estonia.

Swedbank expects consumer prices to decline by 0.4% in 2020 and then increase by around 1% in 2021 as the economy recovers and the impact of government measures that have suppressed prices fades.