Rapid wage growth continued in the first quarter, around 8%, over the year, both by Statistics Estonia and the Tax Board. This was above our expectations (our forecast for gross wage growth was 6.0% for 2018).

Higher economic growth means higher demand for labour. As labour supply is limited, at least in the short-term, the scarcity of labour increases, pushing up wages.

The average real net wage grew by more than a tenth in the first quarter, over the year (due to changes in methodology, exact net wage data are no longer published). That is of a similar magnitude seen during the peak of the previous cycle. Real net wages were pushed up by a substantial hike in the non-taxable income of most employees. According to the Ministry of Finance, 78% of the people have to pay less tax on their income, and 17% have to pay more tax, after the reform.

Due to a strong wage growth and higher social transfers, families’ assessment of their financial situation is the highest on record (data by the Estonian Institute of Economic Research). According to the Estonian Institute of Economic Research, half of families manage to save a part of their income. The growth of households’ loan portfolio has accelerated but is still modest and below the growth in deposits. 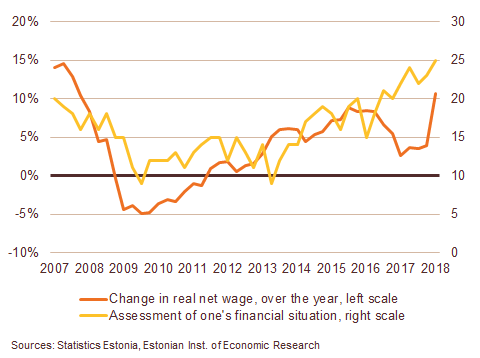 Tax reform has not lifted consumption so far. Retail sales volumes have grown very modestly in the first quarter (+1.0%, over the year), although changes in taxes (excise taxes, vehicle taxation) and the weather make it difficult to compare the first three months of this and last year.