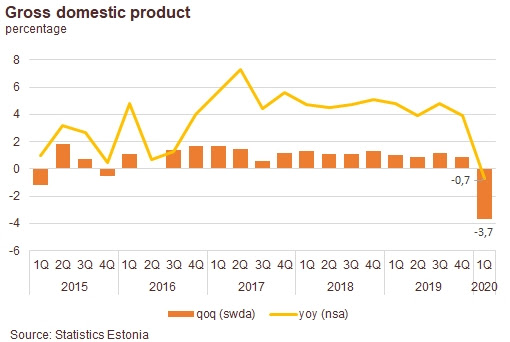 There were more economic activities with increased value added

Although the largest positive contribution to the value added growth came from ICT and construction, this will not last. In April, turnover of all business sector activities, including ICT, dropped, whereas the negative impact of the crisis on construction is delayed. Substantial contraction of the energy production, that started already in the beginning of 2019, continued in the first quarter, this year, as well. 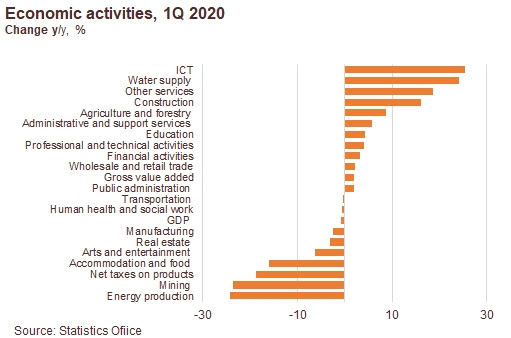 The deteriorated external environment will have an increasing impact

As the external environment has deteriorated and foreign demand has weakened, export of goods and services decreased by 2.6%. Manufacturing – the economic activity, substantially dependent on foreign demand – value added dropped 2%. Demand for imported goods and services has declined substantially and imports dropped by 5.2% in the first quarter. The larger contraction of imports compared to exports had positive impact on GDP. Based on the forecasts of Estonia’s major trade partners’ GDP, exports from Estonia is expected to contract roughly by one tenth, this year.

Private consumption has been declining since mid-March 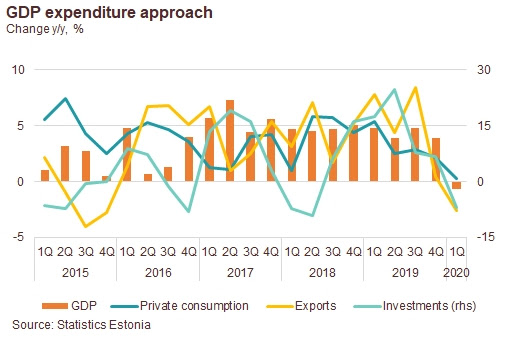 Recovery from the crisis will be uneven across sectors

The preliminary calculations show that business sector turnover dropped by on fifth in April and economic sentiment fell close to the trough in 2009, whereas in May it has not improved yet. Industrial sector production expectations and services’ sector demand expectations that fell even more than the level 11 years ago, improved only modestly in May.

Although, Estonia is gradually reopening its economy and has completed substantial share of restrictions, that were enforced during the escalation of the health crisis, or will do it soon, the recovery will not be fast and will be uneven across sectors. We expect that the trough of the GDP decline (in year-on-year comparison) is in the second quarter. Based on our recent forecast, Estonian GDP contracts 7% this year, while next year we expect to see 5% growth.