Several important economic indicators were updated last week. The new GDP flash estimate for the third quarter indicates that instead of picking up speed, as was expected at the beginning of the year, economic growth is instead beginning to freeze.

Growth in the third quarter was marginal

The week was full of economy-related news. An unpleasant surprise was provided by the GDP number for the third quarter, published on Wednesday, indicating that the growth of the Estonian economy was only 0.5% in the year-over-year comparison. While the 2% rate of growth in the second quarter even slightly exceeded expectations, the third quarter clearly did not meet them. Previous months have brought negative news mostly from the industrial sector, where production volumes have dropped significantly.

The main factor dragging down growth in the industrial sector in the third quarter was the decreased level of energy production, due to the availability of cheap electricity in the Nordic countries, and a much lower demand for telecommunications and electronics, although volumes have declined in many other sectors as well. Since growth is slow almost everywhere in Europe, including in several of our export partners, competition among undertakings when selling their goods is high, and getting by with small volumes and low prices is the unfortunate reality.

Surprisingly, according to the press release from Statistics Estonia, additional value in the commercial sector was close to 0% growth as well. Next to the decline in industrial production, rapid growth has taken place in retail trade – the volumes of retail sales increased by 8% in the third quarter. The decrease in the added value of trade refers to the fact that, regardless of the increase in revenues, expenses have increased faster. The initial flash estimate on the growth in GDP is only published in the form of a press release, which is why the reasons for the slow growth cannot be analysed any further.

A more comprehensive set of data will be revealed in the beginning of December, when the statistics on the economic results of the business sector in the third quarter will be published. It should be taken into consideration in the calculation of GDP that the initial assessments may not be overly accurate and the numbers will be adjusted later. One of the examples of how notable these differences may be is the adjustment of Estonia’s 2.1% economic growth in 2014 to as high as 2.9% – the value of this nearly 1% difference is millions of euros. Hopefully, the GDP number for the third quarter will remain the last poor result and the increasing economic security of Europe will also open up new possibilities for Estonia’s exporting industries.

The strong decline in exports in July and August gained even more momentum in September – export turnover decreased by as much as 10% compared to last September. Therefore, in total, Estonian exports in current prices fell by almost 7% in the third quarter. In September, the decline in exports was strongly influenced by the high system of reference to the previous year in Russian-oriented export. As you may remember, September was the first month following the application of sanctions on foodstuffs and it seems that, in fear of an expansion of the restrictions, undertakings have decided to complete all of their pending transactions as quickly as possible.

September exports were also significantly diminished by a 40% drop in electrical machinery and equipment (mainly telecommunication devices) sent to Sweden, which dragged total exports below zero, regardless of the doubling of the Sweden-oriented furniture exports. Leaving Sweden and Russia out of the calculation, Estonian exports in the third quarter would have been zero. Estonian exports to Latvia also dropped a good deal in the third quarter, declining by 9%. Latvia-oriented export was inhibited by the substantially lower export of electric power, but also by a 40% drop in the export of machinery and equipment.

Among important export partners, exports increased in the third quarter in the direction of Finland for the first time this year, but only by a meagre percentage. Surprisingly, exports to Lithuania (+5%) and Norway (+13%) increased, although the economies of both of these countries have been in more trouble than expected this year. There was also a 2% increase in Estonia’s exports to Germany in the third quarter. It is an inviting target market for many undertakings and states.

Drawing 1. Changes in exports in the third quarter, according to country of destination and chapter 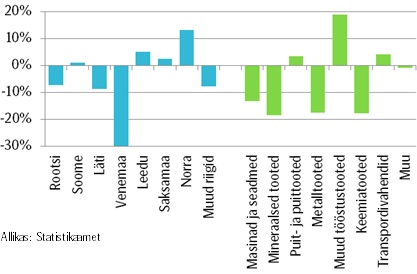 In terms of chapters, the third quarter was weak in the main export article of Estonia – machinery and equipment. The main contributor was the abovementioned drop in the export of telecommunications equipment to Sweden. From the large chapters, however, the fastest growth could be seen in the export of other industrial products, dominated by prefabricated buildings and furniture.

The number of tourists increased in the third quarter

The summer months were more successful than before for the tourism sector. In the year-on-year comparison, the loss of Russian tourists meant a 2% decrease in the number of accommodated guests, both in the first and the second quarter. However, the third quarter brought a change with 3% more people staying in accommodations than in the previous year. A significant contribution was made by the fact that staying in local establishments providing accommodation has become considerably more popular among our own people.

The number of Estonians accommodated increased by 8% compared to the third quarter of last year. Perhaps an even more important breakthrough is the increase in the number of foreign tourists, although it is by a mere percent. The last time the number of foreign tourists was on the rise was in the second quarter of 2014. Growth in this number was made possible by the interest in our neighbouring countries to visit Estonia. After a long period of time, the number of Finnish tourists increased in the third quarter (+2%), but significant growth can be seen in the number of overnight stays by Latvians and Lithuanians in Estonia – by 13% and 14% respectively.