Swedbank: Deceleration of economic growth in 1Q2018 was expected 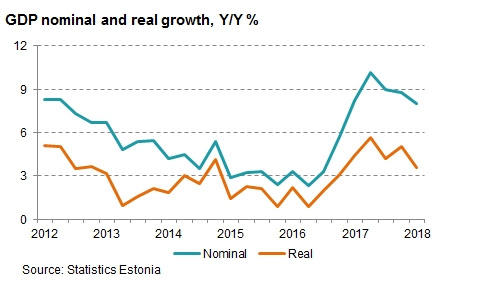 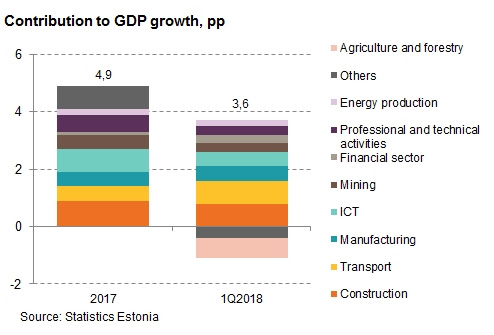 Economic growth is still broad-based, but the contribution of the service sector activities, having major business on the domestic market, has declined

Broadly the same list of economic activities as in 2017 – construction, transport, ITC and manufacturing – contributed the most to the GDP growth in the first quarter. Although economic growth was still broad-based, the contribution of the service sector activities, having major business on the domestic market, has declined. Increased level of income tax exemption, which was enacted since the beginning of 2018, has not have any remarkable effect on private consumption. Private consumption increased 2.8%, which was below our expectations. However, the growth of private consumption is limited by the deepening decline in alcohol beverages and tobacco products. According to the preliminary calculations, the decline of the consumption of these products cut off approximately 0.4 percentage points from the GDP growth in 1Q2018.

Considerable slowdown of export growth (1% in real terms), whereas import growth remained moderate (4%), was one of the major reasons for the deceleration of GDP growth. The ratio of negative net exports to GDP was the largest of the last 9 years. Investments declined 8%, but we expect that this is temporary. The decline in investments came from the considerably weaker corporations’ sector investments, but the public investments were still very robust. Stable and moderate import growth reveals that domestic demand is robust, whereas capacity utilization has risen above the long-term average.

We expect that economic growth in Estonia decelerates in 2018

According to Swedbank forecast, Estonian GDP growth decelerates to 3.9% (4.9% in 2017). Composite Economic Sentiment Indicators are still on the highest level of the last 4 years, but it has gradually come down. We expect that the growth of foreign demand eases somewhat this year, but will still offer good export opportunities. At the same time, risks of the possible worsening of foreign demand (possible spread of protectionism in trade, increased uncertainly due to the populist governments’ economic policy decisions, etc.) have increased. Export growth expectations of the Estonian export enterprises have worsened this year.