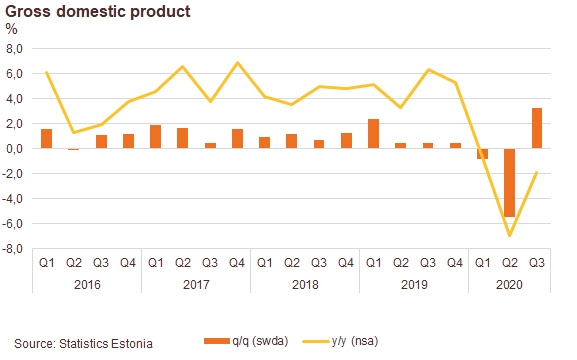 Contributions to GDP continued to be uneven across the sectors In the current crisis, the sales volume of Estonian retail trade companies decreased only in April and increased significantly since May in annual terms (6% in October). Thus, private consumption has recovered swiftly – the drop was only 0.7% y/y in the third quarter – mainly due to increased consumption of food, alcoholic beverages, furnishing and an increase in housing expenditure.

Investments unexpectedly picked up by 13%. The positive contribution to investment growth came from business sector investments and government investments, that rose by 23% and 18%, accordingly. Behind the strong growth of business investments was mainly the large-scale software investment of one company. Household’s investments decreased by 17%.

Exports dropped more than imports and thus net exports contributed negatively to the economic growth in the third quarter – the drop in exports was 8.6%, while imports dropped by 2%. The exports of goods rose by 4%, while the exports of services (close to -30%) almost didn’t improve. 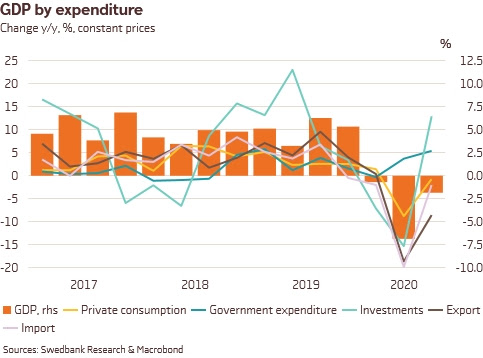 The second wave of coronavirus worsens the near-term outlook

The deepest drop in the economy is behind us, however, the uncertainty remains high due to the second wave of coronavirus and the following restrictions. Thus, this will continue to be a drag to the economy in the fourth quarter and the first quarter, or even first half of next year, however, positive news on coronavirus vaccine are adding optimism that the end of the pandemic is in sight. According to our forecast, published on 5th November, we expect Estonian economy to drop 3.2% this year and to recover moderately next year.