Inflation amounted to 6.6%, over the year, and 1.2%, over the previous month, in September. Inflation was previously as rapid 13 years ago, before the 2008-2009 crisis. Despite the extremely rapid economic growth, prices are primarily lifted by external factors. Half of the 6.6-percent increase came from the rise in the prices of electricity and motor fuels. 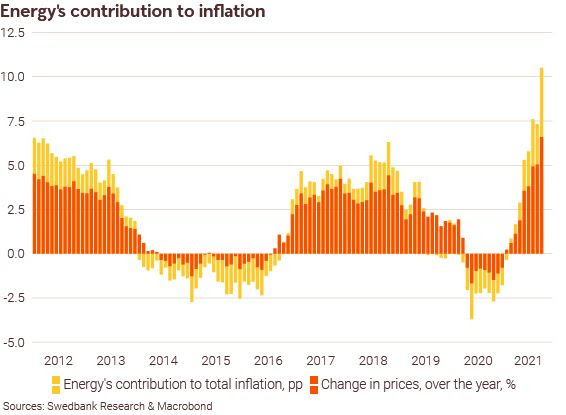 The rise in prices may accelerate further in the coming months, as the rise in the prices of different energy products has not yet reached the price index. In 2021, prices are expected to rise by about 4 percent, as inflation was slower in the first half of the year. The price increase should slow in spring.

The increase in energy prices will have a negative, but still rather limited, impact on the Estonian economy

Energy has a relatively small share in the budget of the average family. Electricity and heating together make up 8 percent of the average household budget in Estonia. Motor fuels add another 5%. The average wage and pensions have risen at least as much as prices this year, so the purchasing power of households has not declined. Higher prices have not yet discouraged consumers. Retail sales rose by 9 percent in August.

Higher energy prices also affect companies, although the share of energy costs in companies is generally small, only 3 percent. At the same time, there are companies that will be hit by rising energy prices. The share of energy costs in production costs is higher in the energy sector, pulp and paper industry, and road transport. The latter is primarily affected by the price of diesel, which has risen significantly less than the cost of gas or electricity. As demand remains strong, especially in the industrial sector, higher production costs can be offset by higher sales prices. Larger and more energy-intensive companies have also secured part of their energy supplies with previously concluded contracts, which has eased price pressure for them.

More expensive energy has a negative – but manageable – impact on the economies of Estonia and most other countries in our region, except for Norway, which currently enjoys the largest ever export turnover of oil and gas. Most Nordic and Baltic countries import more energy than they export, so rising energy prices are bad news for them, even if some sectors, such as the Estonian oil shale industry, benefit from higher energy prices. However, imports of Estonian energy products exceed exports by only 0.5 percent of GDP, as exports of shale oil and peat somewhat compensate for imports of oil products, gas, and electricity.