The growth of the average gross monthly wage decelerated from 7.6% in 2016 to 5.7%, over the year, in the first quarter. The rapid growth in the average wage is supported by a lack of suitable labour and a 9.3-percent increase in the minimum wage. The lack of suitable labour is the most important factor restricting business for a fifth of manufacturing and service companies and a third of construction companies, according to a quarterly survey by the Estonian Institute of Economic Research.

Slower growth of wages reduces macroeconomic risks. Too fast growth of labour costs could be dangerous in the longer term, as it reduces companies’ ability to export and invest. Last year enterprises’ profits decreased by 9.9%, whereas investment volumes declined by 12.1%. As order books and output prices should increase and labour costs grow more slowly this year, the profitability of the business sector should improve in 2017.

Average wages rose in most sectors. Wage growth was faster in the energy sector where wages grew modestly in the past due to a substantial decline in energy prices. The lack of qualified labour pushed up wages in trade and IT. Average wage level remained unchanged in the primary sector, health care and finance. In agriculture and health care, the rate of job vacancies is smaller than the average in the total economy. 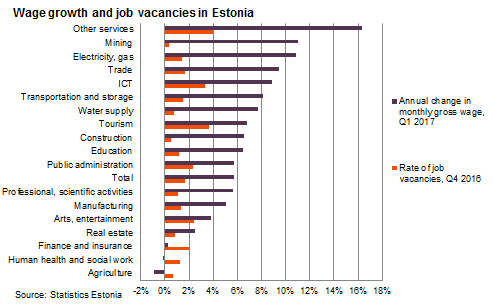 In 2017, the growth of the average wage in real terms is expected to slow to around 3% (2013-2016 average was 6.4% per year), as nominal growth of wages will be somewhat slower and prices will rise. This, in turn, would limit households’ consumption. The substantially slower growth of wage-earners’ purchasing power will be smoothed by an increase in social transfers to pensioners, low-wage earners and children. The real growth of the average net wage rose by only 2.6% in the first quarter of this year. Domestic trade has been unaffected so far – in the first quarter, retail sales volumes grew by around the same pace as in the second half of last year.