In 2019, Estonian GDP growth was 4.3% y/y in real terms and 7.7% y/y in nominal terms. Although, the growth slowed from previous year, it was still strong and exceeded our expectations – our forecast, published in January, was 3.7%. In addition, GDP growth of the first three quarters was revised up (the third quarter growth was revised up by 0.6 pp).

In the fourth quarter economy grew by 3.9% y/y in real terms and 5.9% y/y in nominal terms. Seasonally and working day adjusted GDP grew by 0.9% q/q. 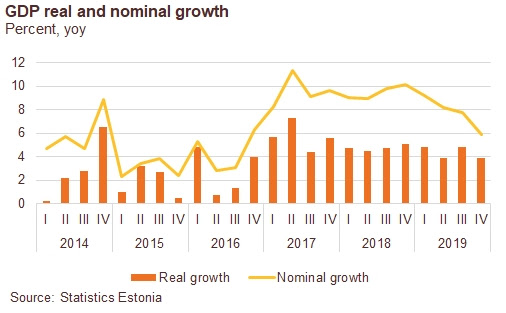 In 2019, the main contributor to GDP growth was ICT sector – almost 30% of the growth came from this sector. Last year, higher contribution came also from professional and technical activities, wholesale and retail trade, agriculture and forestry, and manufacturing. Unusually high contribution to the growth came from net taxes on products, which was affected by VAT and excise duty on fuels. Manufacturing, which contributed positively in the first three quarters, did not contribute to economic growth in the fourth quarter. However, the slowdown was expected due to weakened foreign demand and worsened industrial confidence. Construction sector, that has been one of the main contributors to the economic growth in previous three years, contributed negatively last year. The largest negative impact to the growth came mainly from energy sector as electricity production declined due to the sharp rise in CO2 quota price. 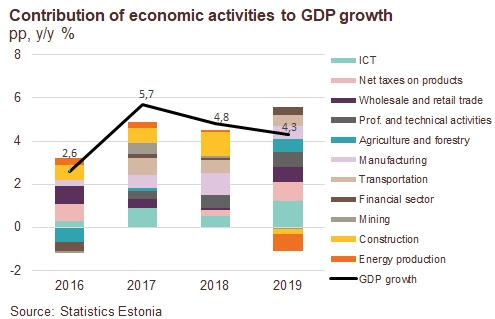 According to our latest Swedbank Economic Outlook published in January, economic growth in Estonia is expected to slow to 2.4% this year. Our forecast does not include possible impact of planned pension reform. It is also too early to measure possible impact of coronavirus, but if the spread of the virus would be soon under control, the impact to the euro area economy will be limited.