Swedbank: Estonian economy recovered from the recession faster than expected

Economy grew by 5.4% annually (non-adjusted) and 4.8% quarterly (seasonally and working day adjusted) in Q1. The result exceeded our expectations and was the strongest among European countries (according to the numbers published so far). 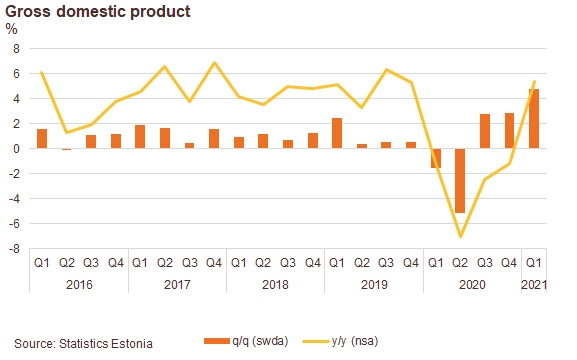 The restrictions continued to affect tourism sector the most

The strongest contribution to the economic growth came from trade, ICT, financial and insurance activities, health and social care, and energy sector. In all these activities the growth of the value added was at a double-digit compared to a year earlier. GDP growth was slowed by the contraction of the value added in construction, accommodation and food, agriculture, and manufacturing sector. The value added of the most heavily hit sector in this crisis – accommodation and food – dropped by 42% in the first quarter. 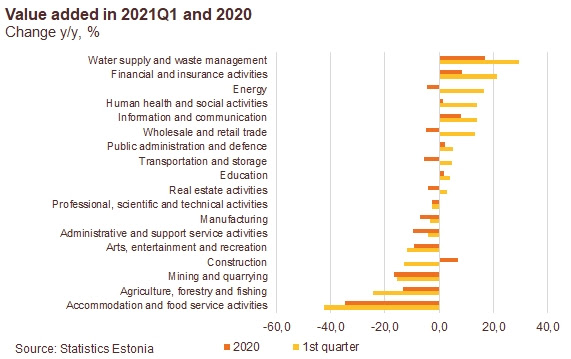 Private consumption drops due to the virus containment measures

Investments again picked up by a stunning 55% annually. However, behind that strong growth was mainly the large-scale computer software investment of Volkswagen’s subsidiary in Estonia. However, it had a neutral impact on GDP as the service needed for this investment was imported. Government and households’ investment growth was also strong in the first quarter, 14% and 13% accordingly.

Estonian economic sentiment continues to improve. Outlook for the demand has brightened in manufacturing and services sector. Euro area and US PMI have also climbed, which shows that external demand is increasing, and thus, offering better export opportunities to Estonian companies.

According to Swedbank’s last economic outlook, this year’s GDP was projected to grow by 3%, but stronger than expected first quarter allows us to revise our forecast upwards for this year.