Wage growth decelerated as expected. In the second quarter, the average full-time gross wage amounted to EUR 1321, up by 6.4%, in a year. Median wage reached EUR 1014, up by 6%, over the year, according to the Tax Board.

The average gross wage increased in all sectors, except for administrative services. Among bigger sectors, wage growth was the fastest in the retail segment that is struggling with an acute labour shortage, facing close to 2,000 unfilled vacancies.

Higher economic growth means higher demand for labour. As labour supply is limited, at least in the short-term, a shortage of labour increases, pushing up wages. Swedbank expects the average gross wage to rise by 6.6% in 2018 and by 6.0% in 2019.

The average real net wage grew by around a tenth in the first six months, year-on-year. That is of a similar magnitude seen during the peak of the previous cycle. Real net wages were pushed up by a substantial hike in the non-taxable income of most employees. The Tax Board’s data show that the hike in the non-taxable income might have pushed up gross wages among the high-income earners (whose incomes were to shrink due to the reform) and lowered gross wage growth among the lower-wage group (who were to benefit from the reform). 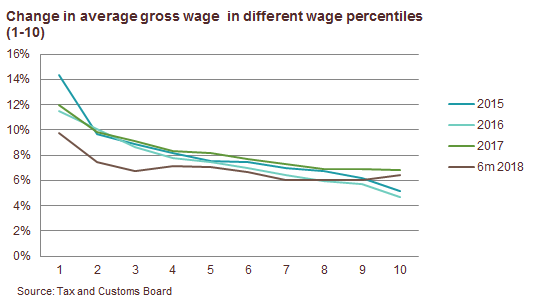 Rapidly growing real incomes have had a minor impact on consumption. Retail sales volumes have grown by only 0.5%, over the year, in the first 6 months of 2018. Due to a strong wage growth and higher social transfers, families’ assessment of their financial situation is the highest on record (data by the Estonian Institute of Economic Research). According to the Estonian Institute of Economic Research, 53% of families manage to save a part of their income. The growth of households’ loan portfolio has accelerated but is still modest and below the growth in deposits. 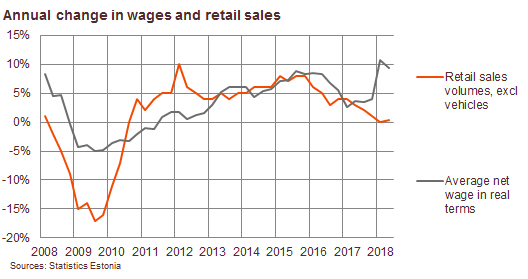