Swedbank: Foreign direct investment – better, but there is capacity for more

Although there is no one-to-one link between FDI and investments into fixed assets, long-term comparison shows that there is evidence of correlation between these indicators, especially in manufacturing sector where the need for fixed assets is greater. Inflow of FDI has been gaining speed for the past two years and industrial confidence is improving. This suggests that we could start to see more investments into fixed assets soon.

Structure of Estonian FDI by sectors

Financial and insurance activities, that used to make up 50% of FDI back in 2005, are giving way to other sectors. The importance of manufacturing sector as receiver of FDI is also decreasing because of structural changes in the economy. Currently real estate activities make up more than 18% of FDI, more than during the previous real estate boom in 2007. Although the growth of FDI in professional, scientific and technical activities has recently been lagging it is important for the future.

FDI diversification by country has increased

Sweden has been a major contributor to our FDI from the beginning of independence, and it still is today, although the importance of Sweden is continuously decreasing. After the start of the conflict in Ukraine the FDI market share of Russia is also decreasing whereas other smaller countries, such as neighboring Latvia and Lithuania, invest more in Estonian companies year by year. Nevertheless more than 80% of inward FDI in Estonia originates from the EU. 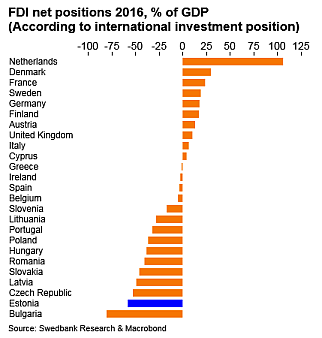 The Estonian Economy – Foreign direct investment – better, but there is capacity for more