• Inflation has remained relatively modest despite a rapid growth in wages.
• Inflation is forecast at 2.4% this year and at 2.3% in 2020.

Inflation slowed from 2.4% in August to 2.2% in September. Goods were 1.4% and services 3.5% more expensive than last year. The biggest contribution came from entertainment, including package holidays, newspapers, and gardening items. Rapid wage growth supports demand, but also means higher production costs, especially in the services’ sector which is usually more labour-intensive. 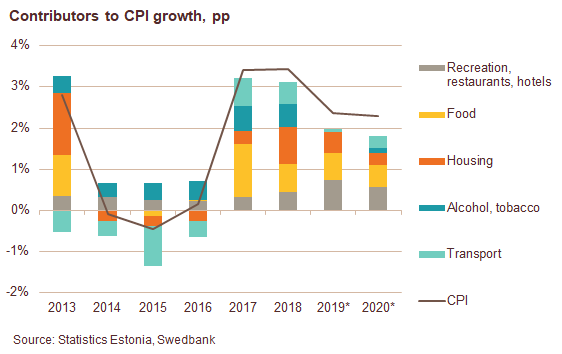 Food prices, up by 3.2% over the year, also contributed significantly. We expect food inflation to slow in the coming months due to a good harvest. The prices of alcohol declined due to lower excise taxes, although the decline in prices was smaller than the change in taxes. In addition to alcohol, the prices of communication services decreased.

The prices of motor fuels remained at last year’s level, although crude oil was 17% cheaper, in euros. Despite political tension in the Middle East, oil prices remain low, because of concerns over global demand.

Moderate inflation and a rapid growth of incomes support consumption. Retail sales’ volumes grew by 5% during the first 8 months of the year. Despite larger retail area and more active use of e-commerce, margins and selling time of inventories have remained at last year’s level in the first half of 2019.