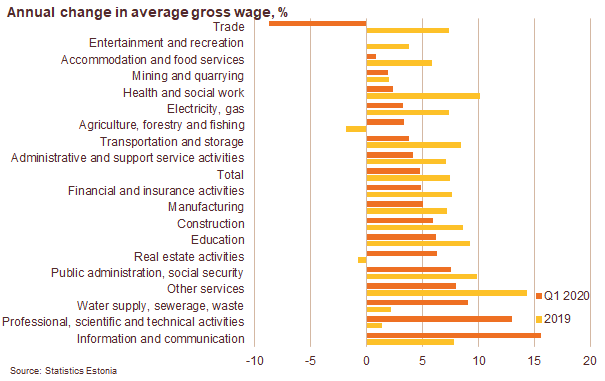 The situation in the labour market changed dramatically in the second quarter
Currently, a quarter of the total labour force (50,000 + 120,000 persons) is either unemployed or participates in the government’s wage-support scheme. According to a recent survey by Swedbank, 17% of respondents had seen a decline in their income. Household sentiment improved in May compared with a very weak April. In May 57% of the families expected their economic situation to remain stable in the future, 14% expected an improvement, and 21% expected things to get worse.

Wage growth is expected to disappear in 2020

An economic crisis and a surging unemployment rate slow gross wage growth to 0.5% in 2020. Wages in the private sector will be hit harder than the wages in the public sector.

Job losses and wage cuts mean lower consumption. The loosening of restrictions and the opening of shopping centres has lifted retail trade volumes but not to levels seen before the crisis, based on Swedbank’s clients’ data. Shaky sentiment and different restrictions have boosted savings. Household deposits grew by 11.5%, over the year, in April. Demand for credit has shrunk. The volume of car leases dropped by 66% and housing loan volumes by a quarter, in April, over the year.