Swedbank: The unemployment rate should peak this autumn

• Labour market figures were still strong before the crisis.
• Data has deteriorated rapidly since March.

Corona crisis did not affect Q1 data
Q1 labour market survey was carried out between January and March, i.e. before the crisis hit. Therefore, the labour market data still looked good in the first quarter. The employment rate was 68.1% and the unemployment rate only 5.0%. Employment increased by 9,000 persons in the services’ sector among women who started working part-time. The number of the unemployed totalled 35,000.

Things have changed dramatically since then
The number of the registered unemployed has surged to around 50,000 (7% of the labour force). In addition, over 100,000 persons (15% of the labour force) receive wage support from the government (a scheme where the government pays 70% of the wages of the employees most affected by the crisis for up to 2 months). According to our forecast, the unemployment rate would peak in autumn, at around 15%, and recede after that. Tourism, transport, and the manufacturing industry will be hit the hardest. The unemployment rate would amount to 9.5% in 2020 and then decrease to 7.7% in 2021 as economic growth restarts. 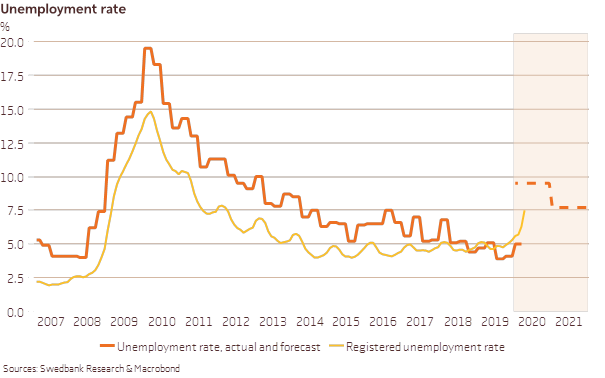 Wage growth should stall
Struggling companies and a rise in the unemployment rate will ease wage pressures. When Q1 wage data should still be solid (around 6.7%, over the year, according to the Tax Authority), hard-hit economy means much slower wage growth going forward. Swedbank expects wage growth to slow to 0.5% in 2020 and then slightly accelerate to 2.1% in 2021.