According to the second estimate of Statistics Estonia, GDP grew 2% yoy in real terms in the second quarter (flash estimate was 1,9%). Compared to the previous quarter, GDP grew 0.7% (seasonally and working day adjusted).

Statistics Estonia published its regular revision of last four years, as well, whereas the last year’s GDP was revised up from 2.1% to 2.9% (major correction in the first quarter). This lifted Estonia together with Lithuania among the fastest growing countries in the region.

Wholesale and retail trade contributed the most to the economic growth in the second quarter. However, more than half of the GDP growth came from net taxes on products with the support of robust growth of VAT revenues. Whereas, primarily those economic activities which sell their goods and services on the domestic market contributed to the growth, activities dependent on foreign markets and foreign demand (transportation and manufacturing) inhibited the growth the most.

Transport sector suffers primarily from the weakened demand from Russia and increased competition from Russian cargo ports. Substantial role in the decrease of manufacturing value added is played by the halted production and export of electronic products. Weak Russian market has substantial negative effect as well. 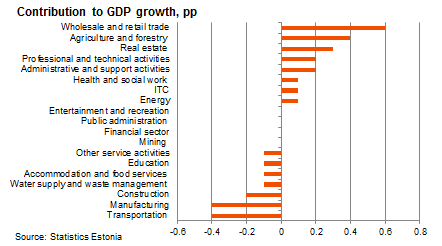 Export of goods and services decreased by 1% annually in the second quarter. Whereas, last year the robust growth of exports of electronic products compensated for the fall in exports to Russia, this is not the case anymore. At the same time, its positive, that enterprises have gradually redirected their exports to new markets. We expect that export volume remains approximately on the same level this year as in 2014.

Investments have decreased already four quarters in a row. In the second quarter, the decrease was 8%, primarily due to the negative contribution of corporations. Its positive, that government investments increased after falling five quarters in a row. Considering weak foreign demand in this year together with the decrease in business sector turnover, increased labor costs and decrease in profitability, as well as worsened sentiment, we do not expect broad based growth of investments shortly. 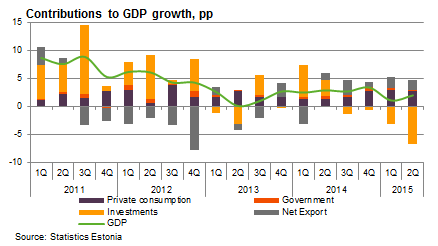 We expect that foreign demand will gradually improve next year, and will give stronger support to the GDP growth. According to our recent estimates, GDP growth reaches to 1.9% in this year and it will accelerate in the next year. However, downward risks have increased in the global economy, which can worsen the outlook of the GDP growth in Estonia, as well.