The growth of the average monthly gross wage accelerated from 4.9% in the first quarter to 7.3% in the second quarter. Wage growth picked up speed due to a very low base one year ago, when the corona crisis hit and lots of businesses were temporarily shut and salaries were lowered, sometimes to be able to apply to government’s wage subsidies.

The corona crisis has lifted wages in IT and healthcare, where the average gross wage is 15-16% higher than two years ago, while the wages in sectors like tourism and trade are still suppressed, 1-2% lower than in the respective quarter of 2019. The average wage in the total economy has risen by 8% in two years. 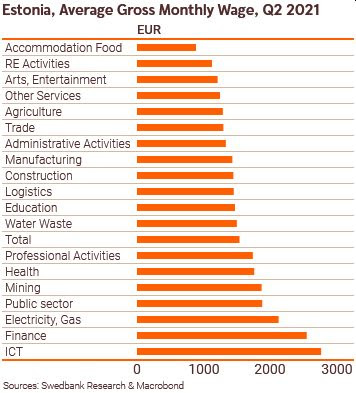 The lack of suitable labour is at the pre-crisis level despite the unemployment rate being substantially higher (the registered unemployment rate being 7.2% currently). Around 30% of companies report hiring difficulties as their most important business constraint. The lack of suitable labour keeps wage growth rapid. Swedbank expects the average gross wage to increase by 6.0% in 2021 and 5.3% in 2022.