Swedbank: The Estonian economy is recovering from the crisis

In 2020, Estonian GDP fell by 2.9% in real terms and 3.4% in nominal terms. The result was close to our expectations – our forecast, published in January, was -2.7%. In addition, GDP results for the first three quarters were revised down by 1.1 pp. 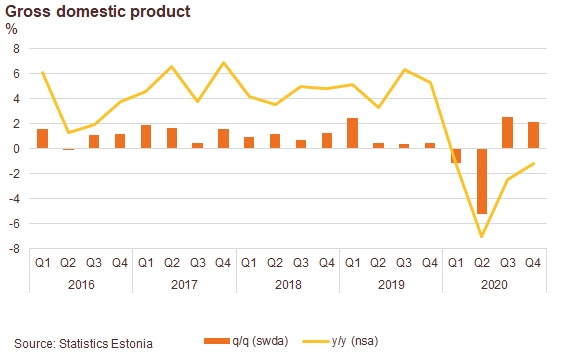 The value added increased in half of the activities

In the fourth quarter, most of the activities showed strengthening of the growth or receding decline. The value added increased in half of the activities. The highest growth of value added was in water and waste management, financial and insurance activities, ICT, and health activities. The highest drop and also the highest negative contribution came from accommodation and food, as well as agriculture and forestry. The large impact came also from lower VAT and excise duties receipts compared to a year ago. The drop in value added of agriculture and tax receipts was mostly due to the base effect. Although, the negative impact from manufacturing continued in the fourth quarter, the decrease in the value added has considerably receded. Last year, the value added of manufacturing dropped by 7%. 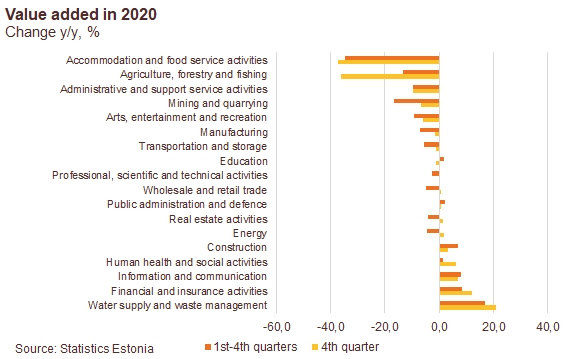 The growth of business investments was exceptionally strong

Exports dropped by 6% last year, while imports rose by 0.7%. As a result, net exports contributed negatively to the growth last year. The exports continued improving in the fourth quarter – the growth of exports of goods accelerated to 14%, while the exports of services also improved, but was still down by 19%.

Last year, the GDP decline in Estonia was one of the mildest in Europe. Estonian general economic sentiment continues to improve. In the fourth quarter, the restrictions to fight the pandemic remained much looser compared to spring. However, rapidly increasing number of cases and slower than expected pace of vaccination are worsening the near-term outlook. The longer-term outlook is more positive – we expect the economy to recover more forcefully in the second half of the year. In addition to improving external demand, robust growth in households’ demand deposits indicate large pent-up demand, which will be released once confidence starts to improve. We forecast that this year GDP will increase by 3.1% and the pre-crisis level will be reached by the second half of this year.