The growth of the average gross monthly wage accelerated to 7.8% in the third quarter. The growth of average net wage was somewhat slower, but still exceeded the increase in consumer prices of 5.5% in Q3. Wages increased in all sectors. In two years, the average gross wage has increased by 11.2 percent. The growth rate has varied across sectors. In IT and mining, the average wage has risen by around 20 percent in two years, while in domestic trade, it has risen by only 1.6 percent. 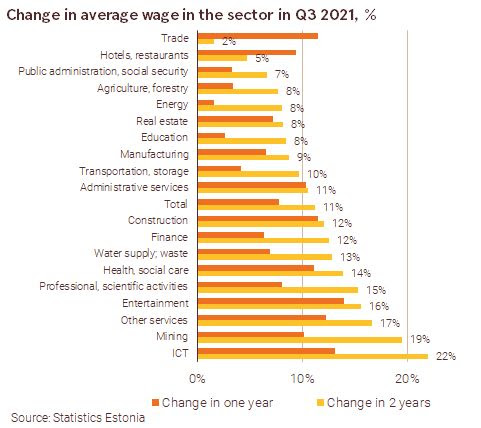 In previous years, wages have grown faster at the lower end of the wage spectrum, but this year wages have grown faster among the higher-wage earners. This is due, on the one hand, to the freezing of the minimum wage this year and, on the other, to the corona crisis, which has hurt sectors and occupations where wages tend to be lower. Next year, however, the growth of wages of lower-wage earners should accelerate again, as the minimum wage will increase by 12.0% in January. 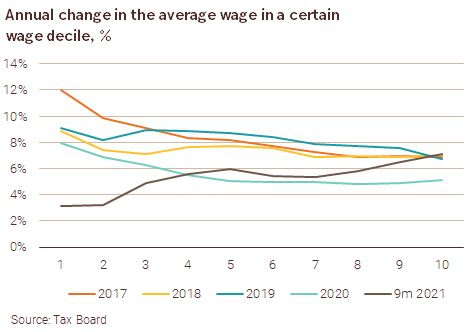 Demand for new employees has increased significantly in both industry and services. About 40 percent of entrepreneurs see labor shortages as their biggest business obstacle. Such a large labor shortage, with a still high unemployment rate, shows the unmatch of vacancies and jobseekers in terms of skills and location. A large part of the unemployed have more simple skills and lower levels of education, while there are a lot of vacancies among jobs that require more complex skills and training.