Looking forward, many market participants agree that there will be no major leap in activity over the summer but many eyes are turned towards the autumn where new decisions will be made based on the economic situation that has developed.

The number of sales and lease offers in the real estate market has not dropped, on the contrary. Due to reduced demand and consumer confidence there is excessive offering in the market but the asking prices have mostly not dropped yet. According to real estate agents, it is necessary to be more flexible in order to sell successfully, as in autumn price negotiations may already be held at a lower level. As for apartments, the first ones to drop are probably the prices of the typical apartments in the secondary market where the offering and the grounds for comparison are higher. For new developments, more discounts on accessories can be seen: storage spaces, parking places, kitchen or side costs.

The loan terms of banks and their willingness to provide loans have not changed much; however, the number of people who qualify for loans has dropped. As the greatest risks for banks are related to the capability of making loan payments, in a situation where, for instance, the employer of a client has used government aid, it means that the certainty of sustainability of the company has been reduced and the risk to issue a loan has increased. 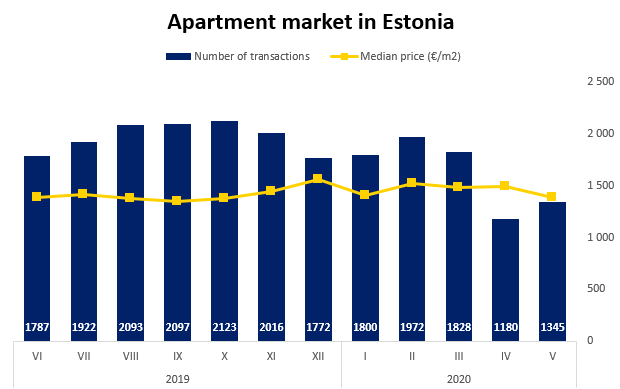 Speaking of the statistics, according to the initial information, 1,345 sales-purchase transactions were concluded all over Estonia in May. In comparison to April, the number of transactions increased by 14%, i.e. by 165 transactions, whereas it was the second worst month of the past five years.

That means it is difficult to speak of speedy recovery. In comparison to April, the number of transactions only dropped in Lääne County and Tartu County. In the latter, a large drop by nearly 40 transactions took place, as there were no transactions with new developments of Raadimõisa Kodu near Tartu.

As already said, the prices of transactions are still at the pre-crisis level. In May, the median price of apartment transactions was 1,389 €/m2, which was lower than in the previous months of the year but 8.5% higher than last year.

As the macroeconomic indicators have declined, it is difficult to hope that the prices will remain at the same level. We will see correction of prices in autumn, which however shall not resemble the 50% of the previous crisis but thanks to the own funds of the developers and better financial situation of families will be significantly lower.

Due to the high share of new developments, the median price of transactions reached a near-record level, exceeding 2,000 €/m2 for the third time ever (2,095 €/m2).

As for the indicator of the secondary market, i.e. the typical apartments of suburban areas of Haabersti, Lasnamäe and Mustamäe, prices are dropping due to the drop in the demand curve: From January to March, the median price of 2- and 3-room apartments was 1,524 €/m2, in April it was 1,500 €/m2 and in May 1,460 €/m2 i.e. 4% lower than at the beginning of the year.

The number of lease offers has increased further in comparison to March and April, which means that transfer to the long-term lease market continues. However, the increase in demand has not been proportional to the increase in offering.

However, the secondary market better expressing the actual activity recovered very slowly – 61 transactions were concluded in the secondary market in April, 64 in May. Due to the very high share of new developments (39%), the median price broke the record for the second consecutive month.

According to the local real estate agents, the median price of 1,649 €/m2 should drop, first of all due to the drop in the demand curve. However, the price correction of a rare real estate object at a valued location will not be very high; probably the price axe will first hit the medium-level apartments of Annemõisa where there has always been a lot to choose from.

Similarly to Tallinn and Tartu, also the market of Pärnu went thorough a recovery in May. 41 transactions were concluded in the summer capital in April, and already 63 in May.

The emergency situation has reduced the potential of short-term lease market. According to real estate agents, unlike in previous years, several former clients have kept their former tenants also for the summer.

Unlike the other bigger cities, in Narva the number of transactions in May was lower than in April. If 44 apartment transactions were concluded in April, in May the figure was 38.

The recovery of the number of transactions is negatively impacted by the ongoing corona epidemic in Russia, which means that travel restrictions with the eastern neighbor still apply and they are unlikely to be lifted any time soon.

Therefore, in the past two months the real estate offering has dropped to the lowest level of the past years. In May, a little over 500 apartments were in offering, i.e. nearly 400 apartments less than a year ago. The lower offering, however, has not increased the competitiveness in the market.

Also the demand has dropped, which was stopped the decrease in the median price but has not increased it yet. The median price of transactions in May was 367 €/m2, remaining at the same level with last May.