Regardless of the fact that there were holidays in the middle of a business week and in spite of the heat wave across Estonia, the number of real estate transactions continued to increase in June. According to the Land Board, 11% more apartment transactions were concluded in comparison to May. Thus, the number of transactions in the last months was as follows: 1,180 in April, 1,345 in May and 1,493 in June. The result was 16% lower than the level of last June and 24% lower than the average of the 12 months preceding the crisis. 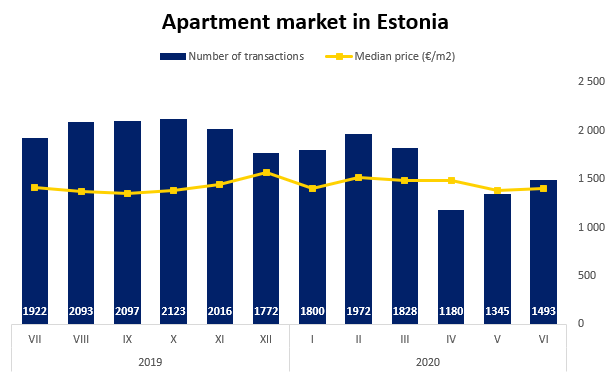 The increase in the number of transactions is mostly due to lifting of restrictions and optimism about the future, and even though there are still discussions about autumn as the crucial period, people have the courage to go through with transactions also today. However, aside from the good news, it must be admitted that as the direct aid from the state will end, unemployment may keep increasing.

There is especially great interest in country houses and summer houses: if it is still early to talk about the full recovery of the apartment market, over 400 transactions with houses and summer houses were concluded in June, which was 50 more than during the same period last year, losing only to last June in the context of the past 12 months.

Even though based on the example of the typical Soviet apartments in Tallinn, the prices of more liquid apartments in the secondary market have dropped by about 3%, we can still not speak about extensive dropping of prices. The cold war still continues in the market – a certain part of the potential buyers wish to see a bigger price drop, whereas the sellers are still convinced that it is possible to find buyers at peak prices, and they are not willing to remove their goods from the market.

We will probably still see some price drop but with the increased demand, the sellers have gained some additional time for their arguments. In June, the median price of transactions was 1,400 €/m2, which was basically the same as a year ago. In Harju County, the median price of transactions was even 2,018 €/m2, it was 1,405 €/m2 in Tartu County and 1,045 €/m2 in Pärnu County.

There were 630 transactions in Tallinn in June, i.e. 100 transactions more than in May. As the share of new developments was still large (39% in May, even 45% in June), the median price of transactions remained very high (2,095 €/m2 in May, 2,085 €/m2 in June), but also the secondary market recovered – if in May only 7 transactions more were concluded in comparison to April (317→324), in June the number of transactions was already 346, which was about 90 less than during the same period last year.

The large sales results of new developments were mainly based on previously concluded contracts, as the actual sales of new developments are still slow, e.g. in the 2nd quarter, 50% fewer transactions were concluded under law of obligations contracts in comparison to the 1st quarter. Still, instead of discounts for residential premises, buyers do receive discounts for annexes to the residential premises, i.e. parking places, storage spaces or kitchen furniture.

The number of lease offers is still large, even though June showed that the price drop has largely slowed down and as the peak season (July-August) approaches, the price level for the best premises may even increase.

During the same period, 54 transactions were concluded with new developments, which was also the best result of this year. Regardless of the 39% share of new developments, the profile of the sold new developments was a little more modest, causing the median price of transactions to drop to 1,470 €/m2. The market of Tartu follows the one of Tallinn also in other aspects – the number of lease offers is still very high; the prices are not made of stone in the sales market but there are no signs of any extensive price drop.

Similarly to the other cities, the number of transactions in Narva in the first six months of this year has decreased by 16% in comparison to last year, regardless of the fact that Narva completely lacks new developments. 45 transactions were concluded in Narva in June, which was seven more than in May, returning to the figures of April.