The figures of the 1st quarter of year 2019 show that the times in the real estate market are still good and even though the growth is slower than before, the setback that influenced the second half of last year seems to be behind us. In the first quarter, 5,257 sales-purchase transactions were concluded with apartment ownerships, of which 57.2% (3009) were concluded in Harju County. 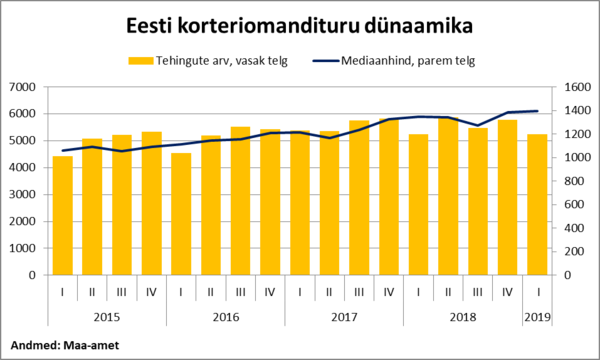 In the 1st quarter, the median price of apartment transactions was 1,401 EUR/m2, which was 3.6% higher than during the same period last year. Unlike the number of transactions where the best times remained in 2017, the price increase has been continuous and also in the 1st quarter there were only two counties where the median price of transactions was lower than during the same period last year. The median price also points rather well at one of the main problems of our real estate market, which is lack of balance between regions, as the median price of transactions in most of the counties is lower than that of Harju County by about 1,500 EUR/m2, and the share of transaction amounts in Harju County is about 80%. Imbalance is high also at the county level where the districts at a greater distance from the county centres have not been able to participate in the rise of the real estate market that has taken place in the past few years. The prices will probably continue to increase also this year, even though as the economy cools down, corrections are to be expected also here. 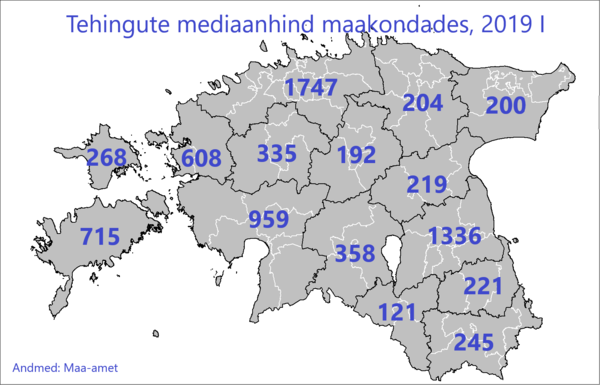 The market of Tallinn also seems to have conquered the low tides of the second half of last year – in the 1st quarter, over 800 new apartments were put up for public sale, which was more than in the 3rd quarter (588 apartments) and 4th quarter (670 apartments) of last year. However, the stock absorption still stays at 13 to 14 months, which with a very small difference (up to 5%) between the transaction and asking price refers to high purchase power. With a higher number of building permits, the number of transactions is likely to increase this year, and even though discounts of extremely expensive developments are already visible, those have a very small influence on the market.

In the 1st quarter of this year, the capital still showed the high baseline of last year, as the number of apartment transactions dropped for the third consecutive quarter, this time by 113, to 2,287.  Transaction prices keep breaking records – the relevant figure was 1,841 EUR/m2, which was nearly by 100 EUR/m2 higher than during the same period last year. The price increase has created an interesting situation where the average price of only a few developments at the border regions of the city have remained at below 2,000 EUR/m2. 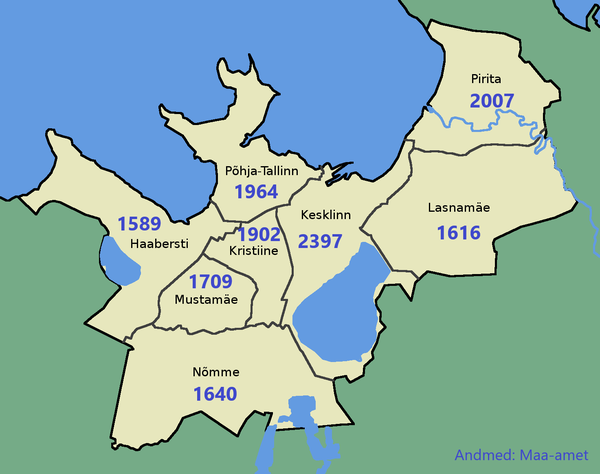 The markets of other larger cities also reflected stability in the 1st quarter, remaining at their regular level in regard to the number of transactions. Tartu showed a slightly bigger fall (nearly 20 transactions) but here it is important to consider the fault rate due to initial data and the larger new development sold last March which might have caused the difference. In total, 410 sales-purchase transactions of apartments were concluded in Tartu, 179 in Narva and 178 in Pärnu.

In comparison to Tallinn, the median price of transactions is more stable in Tartu and Pärnu, as the volume of new developments and the purchase power are lower. Thus, also in the 1st quarter the figure remained at the known familiar level: in Tartu, over 1,400 EUR/m2 for the second consecutive quarter, in Pärnu it increased again over 1,100 EUR/m2and in Narva it remained at 351 EUR/m2. However, the median price may increase this year in Narva, as the public offering has dropped according to the real estate portals and the asking price is not dropping any longer but has remained stable, even though at a very low level for Narva. 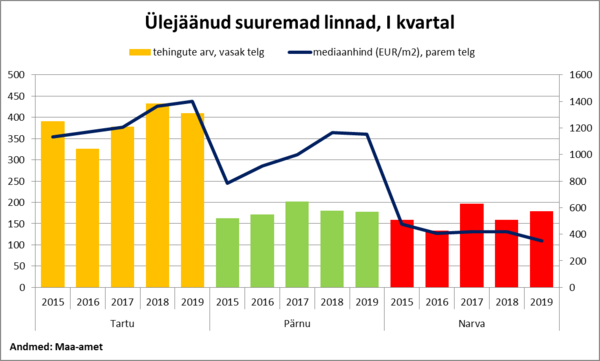