If people in Tallinn are looking for signs of rise or fall in the market, completely different sentiments can be observed in Tartu real estate market. When summing up the October transactions, for Tallinn it can be said that the real estate market turned back to its normal status. The low tides lasting for several consecutive months were overcome, and 937 sale/purchase transactions were concluded with apartment ownerships in October. It is the second best result of the year, only surpassed by that of May.

The growth in the number of transactions was, as usually, based on the conclusion of real right contracts for the previously concluded transactions with new developments; therefore, the next months will provide a better idea whether a temporary setback can be expected in the real estate market or not. The purchase activity of new developments has given no reason for complaining, as the speed of stock absorption has kept a rather similar pace in the past few years. However, there is some cause for worry, as there is an increasing number of developments where the building permit has been received but no construction work has started because the presale has not created sufficient confidence for development. The growth in the median price of transactions shows slight signs of slowing – in comparison to the previous period, the median price increased by 6.4% during the first ten months, whereas during the same period last year, the growth was 8.2%. In October, the median price of transactions in the capital was 1,796 EUR/m2, which was inferior only to this June. 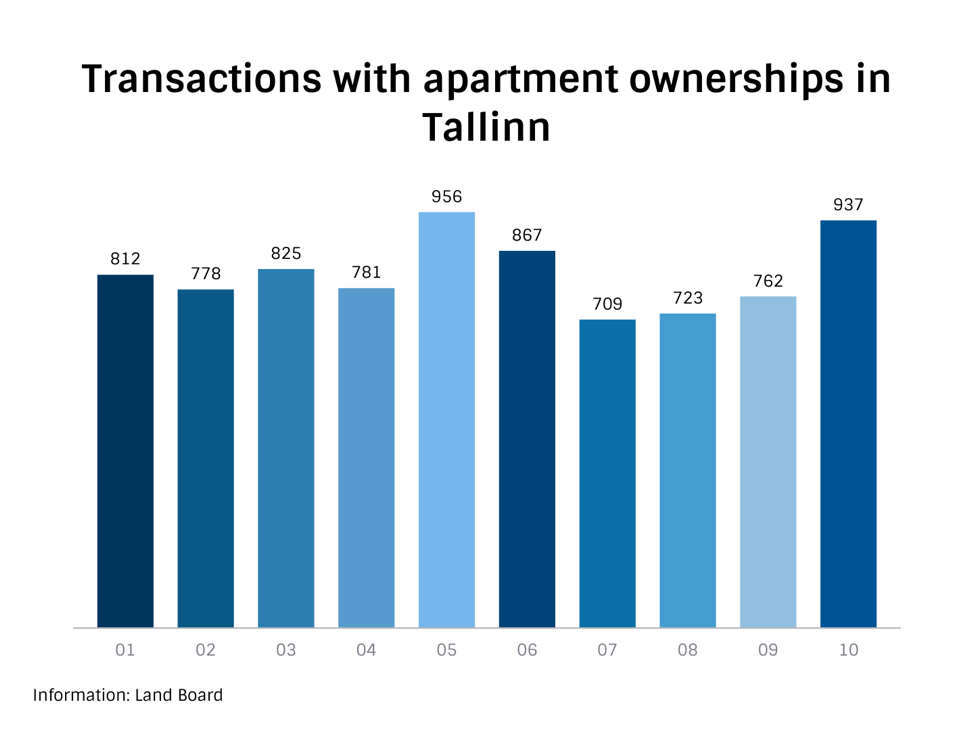 Somewhat undeserved is the shadow of Tallinn on Tartu, the real estate star of this year. If the past two years have been rather lethargic in Tartu, this year has shown an especially striking boost. In the first ten months of the year, the number of apartment transactions has increased by 289 in comparison to last year (188 in Tallinn), the median price of the transactions by 9.1%. In comparison to Tallinn, the sentiments in Tartu resemble those of the capital three-four years ago: as a rule, the developments are small (the average number of apartments in apartment buildings having received a building permit in 2018 is 12), the developers are more confident – for instance, the number of apartments in apartment buildings having received a building permit has increased by over 200 in comparison to the total number last year (–1,000 in Tallinn during the same period) – and the bureaucracy is more flexible. In October, a record-breaking 219 transactions were concluded in Tartu; the median price was inferior only to the result of January and was 1,450 EUR/m2. 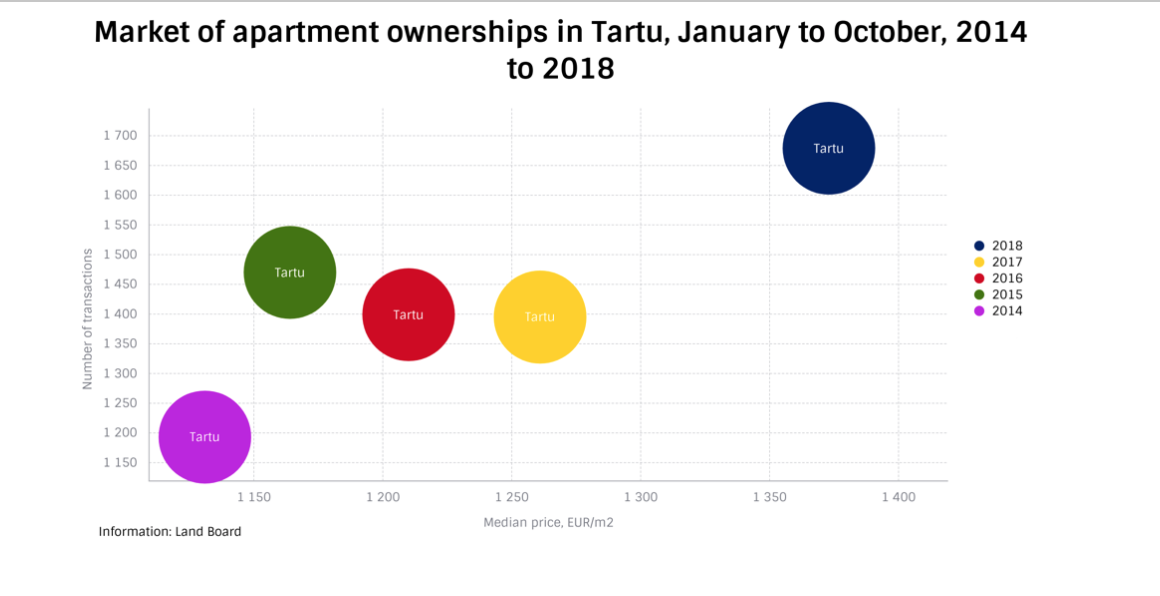 The market of Pärnu is also rising, even though the transactions are not distributed evenly over the year due to the small volumes of new developments. Therefore, in comparison to last year, almost 90 transactions less were concluded in the first ten months of this year, even though the median price of the transactions has increased by 7.7%. Larger volumes are probably going to be achieved next year. Thus, this year is in some sense an intermediate year in regard to transactions. In October, 72 transactions were concluded in Pärnu, and the median price of those was the lowest of the year, only 982 EUR/m2. 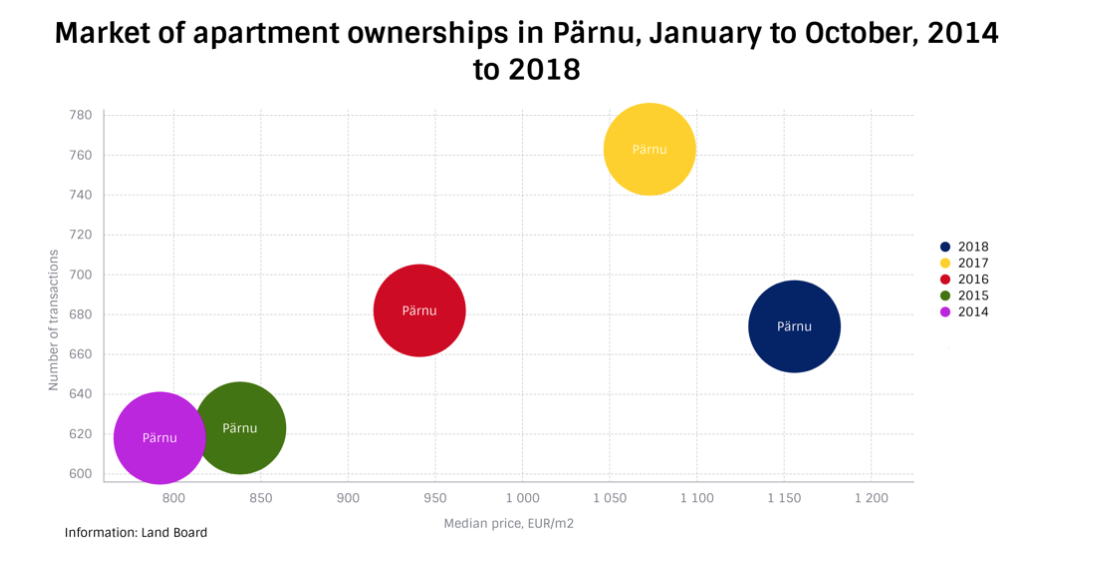 Unlike Tartu or Pärnu, or even some small town, the market of Narva and the whole Ida-Viru County on a wider scale has remained static in the past five years. Even though the lowest point in year 2016 has been overcome, with some exceptions, it is not possible to speak of any growth in the market. The asking prices and the transaction prices have been falling in Narva since 2014, the number of transactions has remained more or less at level of last year. At the background of this year, the activity of October was above average – for the third time this year, over 70 transactions were concluded. The median price, however, remained below 400 EUR/m2 for the fifth consecutive month. 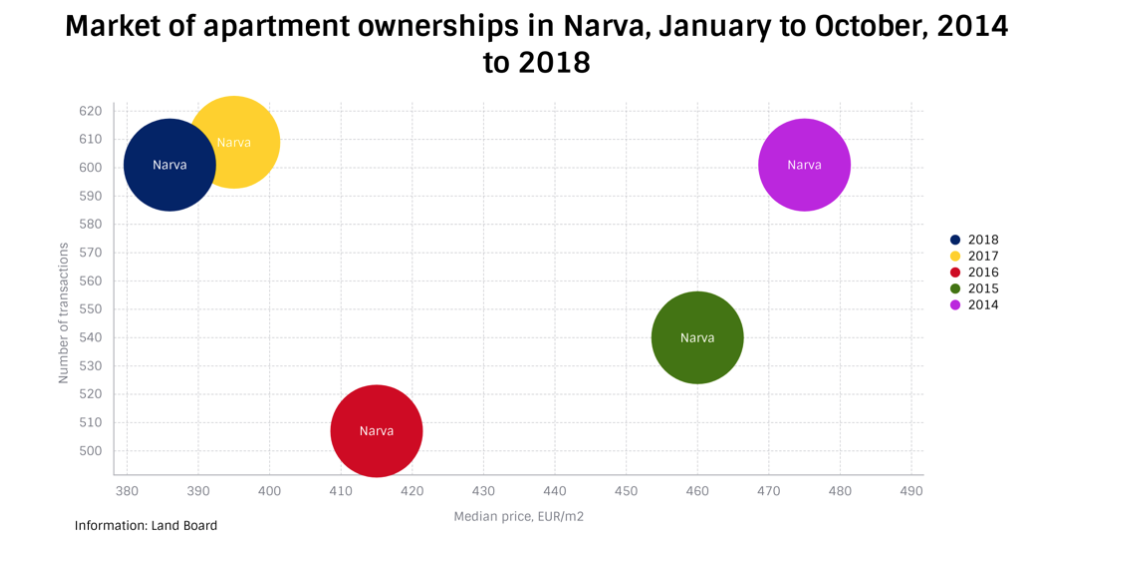