Swedbank: GDP growth in Estonia – the fastest in five years

In the first quarter, the GDP growth accelerated to 4.4% in real terms and 7.6% in nominal terms. Seasonally and working days adjusted, the real growth was 4.0 yoy and 0.8% qoq.

Acceleration of export growth (12%) and robust recovery of investments (17%) contributed the most to the GDP growth. At the same time, households’ consumption growth slowed to only 0.6%.

Export growth was supported by the improvement of import demand of Estonia’s trade partners, but considerable contribution to the growth came from the compensating record in exports due to the import of Tallink ship that was not recorded in Estonia. 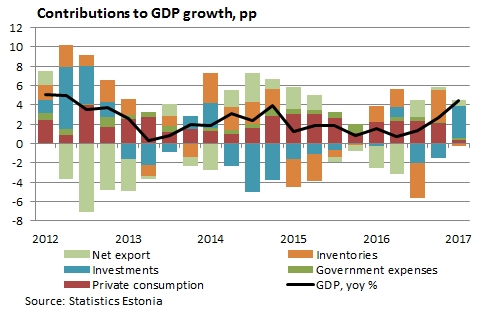 We expect that private consumption growth decelerates in this year. However, such a rapid slowdown of the growth was unexpected. Households’ confidence, including the perception of their financial situation and intention to make major purchases during the next 12 months, has improved in Estonia. Therefore, the private consumption growth rate can possibly be somewhat underestimated.

Although real growth of productivity per employed increased only by 2% (productivity per hour decreased), the growth has gradually recovered since the second half of 2016. We expect that the gap between the growth of labour costs and productivity will narrow in this and next year, which has positive effect on their price competitiveness. At the same time, the procyclical fiscal policy with the major increase in government investments can accelerate wage growth and worsen the situation. 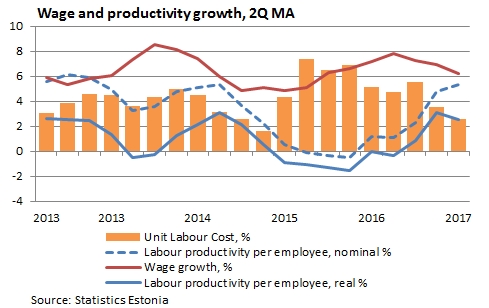 We expect that GDP growth will remain robust during the rest of 2017, but will decelerate compared to the first quarter. In April we forecasted that GDP will grow 2.2% in 2017, but we will likely revise it up in our next Swedbank Economic Outlook.