Economic growth in Estonia continued to be weak in the 3Q. According to the flash estimate, Estonian economy grew 1.1% yoy and 0.2% qoq (seasonally and calendar adjusted). The GDP has increased 1.1% yoy during the first three quarters. We shall probably revise slightly down our GDP forecast made in August.

Despite this meagre growth, industrial sector value added reached to the growth in the 3Q, after a year of decline, value added growth in manufacturing accelerated and energy production showed a robust volume growth, as well. According to the flash estimates, value added in transport and ITC sectors and in wholesale and retail trade increased. Although, private consumption is expected to slow gradually, retail trade growth is still strong. GDP growth was inhibited by the poor harvest in agricultural sector and the decrease in the number of employees in public sector that reduced value added in public administration.

Although the foreign trade statistics and export turnover in manufacturing showed accelerated growth of export of goods, the same indicator, after certain adjustments, in GDP slowed down compared to the second quarter. The growth of import of goods decelerated, as well.

All economic sentiment indicators have gradually improved in Estonia. The growth of corporations’ credit portfolio has accelerated this year, which refers to the improved investment activity among enterprises. Households credit portfolio and investments in dwellings have increased with the moderate pace, as well. Investment growth is restrained by government sector, who has used only a small amount of money from the EU structural funds allocated for Estonia for the period in 2014-2020.

Many of these indicators refer to the gradual improvement of economic situation in Estonia. In addition, job vacancies have increased and nominal growth of wages is robust.

Although we expect the deceleration of economic and import growth in Sweden, UK and Germany, the average import demand of the major export partners for Estonia is expected to improve in 2017. This is expected to offer more export possibilities for Estonian enterprises. In addition, we expect that government will increase the payments from the EU funds in next year and will contribute positively to the investment growth. Producer and export prices are increasing and this is expected to improve enterprises turnover, including export turnover. At the same time, negative risks in the global economy and trade are substantial. Estonia’s new government, currently under formation, will likely bring about changes in economic policy, but before the coalition agreement has been put in place, it’s too early to assess these impact on the Estonian economy. 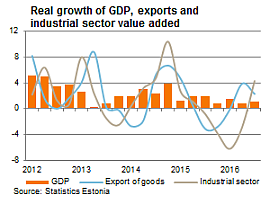 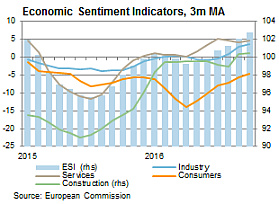