Compared to February, consumer prices declined by 0.7%. Annual inflation slowed to 0.9% in March. Over the year, food, especially fruits and meat products, and entertainment became more expensive. While demand for food is expected to remain robust, demand for hobbies and leisure activities should weaken because of the lockdown, but later also due to higher unemployment and fallen incomes for many households.

In March, the prices of motor fuels declined but less than weak oil prices would have suggested. We expect oil prices to remain low, even when oil producers reach an agreement as oil reserves are large and a fall in oil demand in the first half of the year will be substantial.

In addition to diesel fuel, alcoholic beverages, electricity, and communication and water services became cheaper last month. Lower excise taxes affected the price of alcoholic beverages. Favourable weather has a large impact on the demand and supply of electricity in the Nordic market. March 2020 was 3.5 degrees warmer than March 2019 in Estonia.

The consumer price index for March largely reflects the situation before the declaration of the state of emergency, as price data was collected before the lockdown started.

In 2020, inflation is expected to reach 0.8%, according to current estimates. If we include the excise tax declines proposed by the government on diesel fuel, natural gas, and electricity, consumer prices would grow even less, only 0.4%. Lower inflation is good news for those who face pay cuts or job losses. 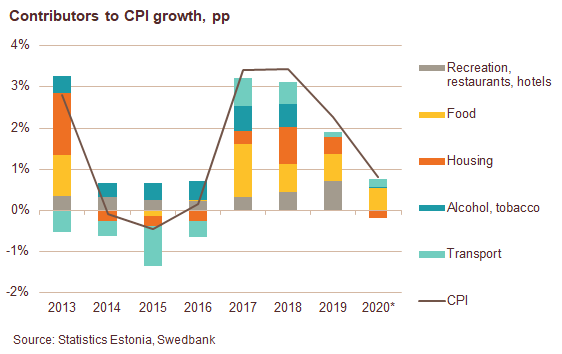