Retreating pandemic risks and looser virus curbs have made shopping and services consumption more accessible and more enjoyable in the Baltics. According to the Google mobility data, the flow of people in retail stores and recreation places was notably larger at the start of this year compared to the beginning of 2021, especially in Latvia and Lithuania. The pent-up demand, job, wage and pension growth, government aid, and savings, including due to the funded pension scheme pay-outs in Estonia, are supporting consumption, despite rising inflation, which is increasingly denting the private purchasing power.

Russia’s invasion of Ukraine and associated price pressures have shattered consumer confidence. The fear caused by the war led to a spike in Swedbank ATM cash withdrawals in late February and early March, especially in Lithuania. However, so far households are not showing any signs of holding back their spending, and cash withdrawals have already normalised.

In the first quarter, the Swedbank card spending, and cash withdrawal surged by 39%, 27% and 25% over the year in Lithuania, Latvia, and Estonia respectively. Real consumption growth is also strong, but it is expected to slow considerably later in the year. 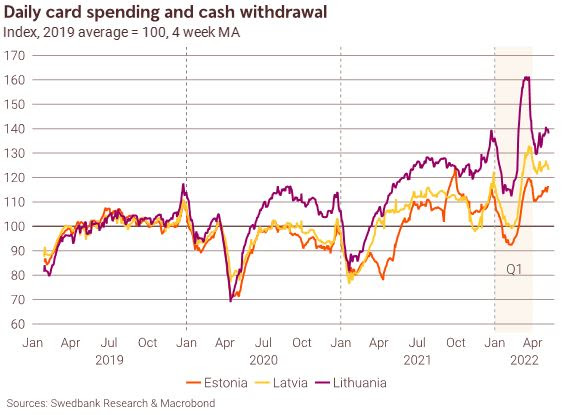