Prices rose by 15.2% year-on-year and 2.7% month-on-month in March. Prices were lifted by more expensive energy and food. Inflation was previously as rapid in the 1990s, during the first years of Estonia’s re-independence. 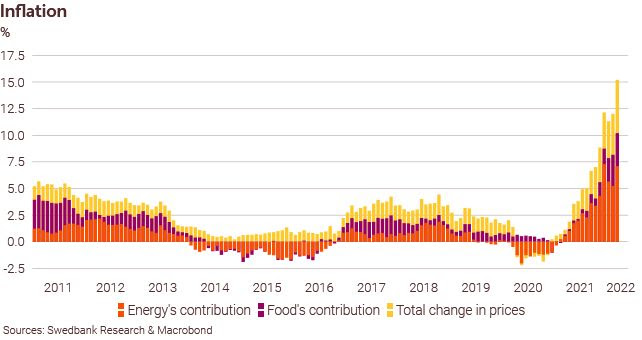 Food prices rose by 13.8%, in a year. The prices of various food items have risen sharply, including vegetables, fish, and dairy products. Food prices are also high in the world market. The Food and Agriculture Organisation’s price index reached an all-time high in February, increasing by almost a quarter, year-on-year. The war in Ukraine has pushed up the prices of wheat, corn, and sunflower oil. 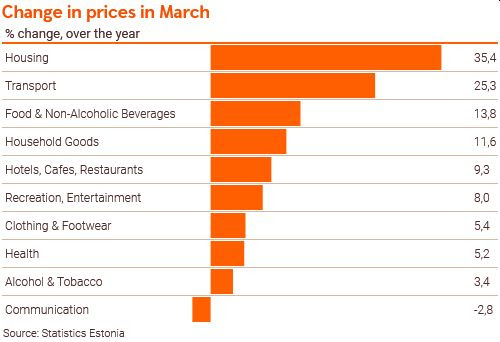 Energy’s contribution to total inflation was close to 50%. Electricity and gas prices grew by 72%, motor fuels by 44%, over the year. Energy prices are expected to remain elevated throughout the year. According to Swedbank’s forecast, the price of oil will exceed USD 100 this year and next. Gas prices will remain very high at least until next spring.

Inflation will remain rapid in the coming months. The rise in prices is expected to slow down only in the second half of the year. Swedbank expects a 10% price increase in 2022. This is twice as fast as the expected increase in the average net wage (around 5%). The increase in pensions (+7.9%) will also be below the price increase this year. Therefore, both wage earners and the elderly would have to tighten their belts.

Savings, which have grown significantly during the pandemic, should cushion the decline in real incomes. But deposits are very unevenly distributed among the population. At the end of the month, 40 percent of Swedbank’s customers still have less than 500 euros in their bank account and around 70% of customers have liquid assets worth less than their one month’s income.

Despite the sharp rise in prices, consumption has been strong so far. In February, price-adjusted retail sales increased by 3.9%, year-on-year. Swedbank’s card payments show that consumers kept their wallets open also after the war intensified in Ukraine at the end of February.