The growth of the average gross wage decelerated to 6.5% in 2017. The rapid growth in the average wage was supported by a scarcity of labour and an improved economic outlook. Economic growth of 4.9% was faster than expected and enterprises finances also look better (total profit grew by 4.9% in 2017).

Wage growth remained rapid and broad-based. The average wage rose in all sectors, except the primary sector. Wage growth was faster in the energy sector and mining where wages grew modestly in the past due to a substantial decline in energy prices. The scarcity of labour pushed up wages in IT. Wages in the government sector rose faster than in the private sector. This is probably temporary and caused by the EU presidency and administration reform (several hundred local officials lost their job last autumn). 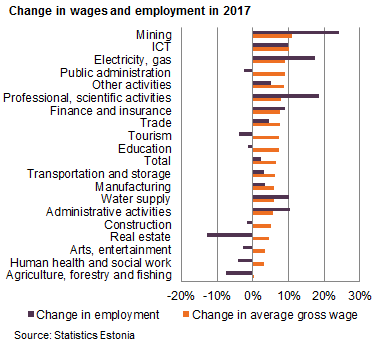 Wage growth was also broad-based across different wage levels. Wages rose the fastest at the lower end of the wage spectrum. This is due to a substantial rise in the minimum wage every year but also because small changes of 10-20 euros look substantial in percentages when wages are low, i.e., below or close to the minimum wage (EUR 470 per month in 2017, EUR 500 in 2018). 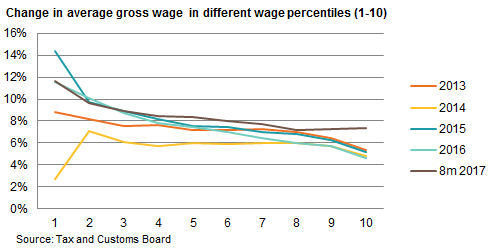 The purchasing power of employees grew more slowly as inflation accelerated. The real growth of the average net wage rose by 3.2% in 2017. Households’ financial situation is good and improving, nevertheless. Families’ own assessment of their financial well-being has reached the highest level of the entire time series (since 1995, by the Estonian Institute of Economic Research). Households’ deposits are growing fast, exceeding the growth of their credit portfolio (9.7% versus 7.6%, in January, over the year) despite active real estate and car leases’ markets.

In 2018, wage-earners’ labour income is expected to accelerate, due to a substantial increase in their nontaxable income. This change in taxes could also lower their wage expectations. This is already seen in a smaller rise in the minimum wage in 2018 compared with previous years. Gross wage growth will remain relatively high as labour demand increases more than labour supply. Swedbank expects the average gross wage to grow by 6% and the real net wage by 9% in 2018.