The major contribution to the growth comes from the domestic market

Although the GDP growth was broad based, construction sector’s contribution was roughly ¼. The growth was supported by robust public sector investments in buildings and structures. In addition to construction sector, ICT, mining, manufacturing and professional and technical activities contributed strongly to the economic growth. The major contribution to the growth came from the economic activities serving the domestic market. Economic sentiment has improved this year, the sentiment index is above the long term average, but the improvement trend has stabilised in the 2H. 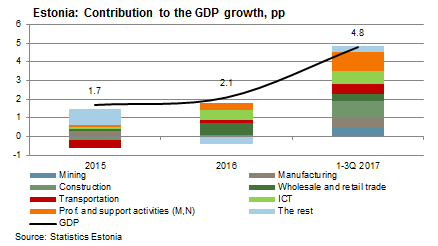 Despite strong foreign demand, export growth has slowed in 2017

Robust growth of domestic demand was supported by all major transactions. Household consumption increased 3.5% and gross fixed capital formation (investments) 13%. Increased inventories contributed to the GDP growth, as well. Despite the increase of foreign tourists, their final consumption in Estonia decreased. The planned increase of minimum level of income tax exemption in 2018 will improve purchase power of the majority of Estonian population and therefore is expected to stimulate private consumption.

Labour productivity has improved in this year

Households’ financial situation is good – their budget position is relatively strong and saving rate (per disposable income) is close to EU and euro area average. Despite some negative risks of the planned tax receipts, public finances are strong, as well. Current account has been in surplus already for a long time and according to the preliminary calculations, it was 4% of GDP in 3Q2017.

Estonian economy has expanded 4.8% in real terms during the first three quarters. According to our forecast, GDP grows 4.2% in this year and will slow to 3.5% in 2018. Both domestic and foreign demand is expected to remain strong in 2018. 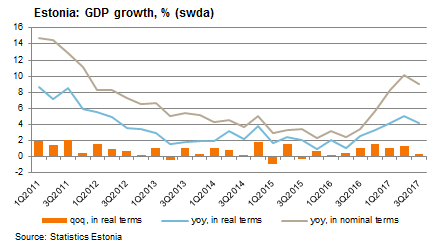