Swedbank: Inflation close to 20% in Estonia

Consumer prices rose more than expected in April. Prices grew by 18.8% year-on-year and 3.6% month-on-month. Inflation accelerated due to the end of government’s energy subsidies on electricity, gas, and central heating in March. Ukrainian refugees lifted rental prices, which rose by as much as 12.5% in a month. Inflation was previously as rapid in September 1996. 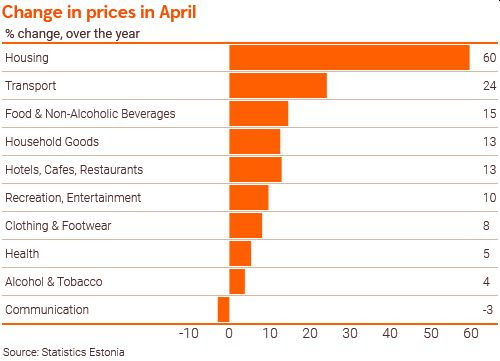 As in previous months, prices were lifted by more expensive energy and food. Food has risen in price by 14.6% in a year. The prices of many food products have increased rapidly, including vegetables, fish, and dairy products.

Inflation will remain rapid in the coming months. The rise in prices is expected to slow down in the second half of the year due to base effects. The growth of both net wages and pensions is far below the rise in prices. Nevertheless, consumption growth has remained robust. Swedbank forecasts a 2% increase in private consumption this year.