Swedbank: The curious case of household consumption in the Baltic countries

The curious case of household consumption in the Baltic countries

Actual individual consumption data published by Eurostat shows that Lithuanian households have much better material welfare than Estonians or Latvians. The data suggest that Lithuanians consume substantially more in real terms, either consuming more or better-quality goods and services per head. Lithuania’s price-adjusted consumption per person amounted to 90% of the EU average in 2018, while it was only 74% in Estonia and 70% in Latvia. This may seem surprising, given that Estonia’s household wages and pensions are substantially higher than Lithuania’s.

There are quite a few factors that could explain the gap between incomes and spending in the Baltic countries. Among other factors, prices are higher and the shadow economy smaller in Estonia, while Latvia and Lithuania benefit from higher remittances. Estonian households also have a somewhat higher saving rate. Finally, here it is worthwhile remembering the quote by Aaron Levenstein: “Statistics are like bikinis – what they reveal is suggestive, but what they conceal is vital“. 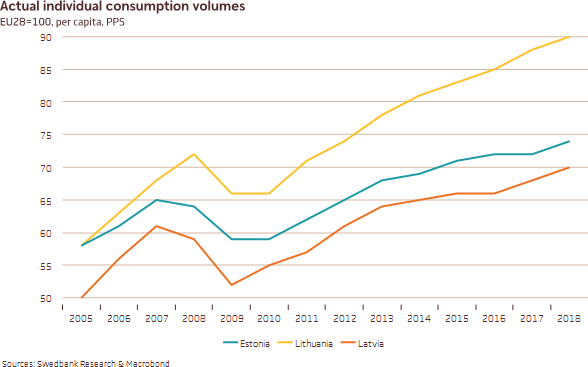