Estonia’s GDP grew 4.1% y/y and 1.0% q/q (seasonally and calendar adjusted) in the third quarter this year. Non-adjusted annual growth was 4.2% in real terms and 7.3% in nominal terms. The growth was above our expectations. 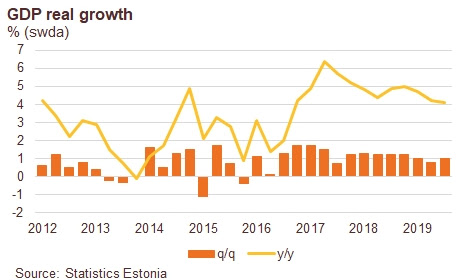 Economic growth is contributed both by domestic and foreign demand

From the production side, ICT, wholesale and retail trade, professional and technical services and primary sector contributed the most to the economic growth, while energy sector (energy production and mining) and construction cut off 1.6 percentage points from the growth. Substantial share to the GDP growth came from the manufacturing sector, as well, which was supported by the robust growth of export of goods. Thus, the robust GDP growth came from the contribution of both domestic and foreign demand. 7% growth of export of goods and services is a good result in the context of the deteriorated external environment and weakened foreign demand. Roughly half of the GDP growth in the third quarter came from the increased net exports. During the first three quarters of the year, total export growth has been even stronger than in 2018. Export growth has expanded despite the fast increase in unit labour costs and industrial enterprises’ worsened assessment of their competitiveness on foreign markets. 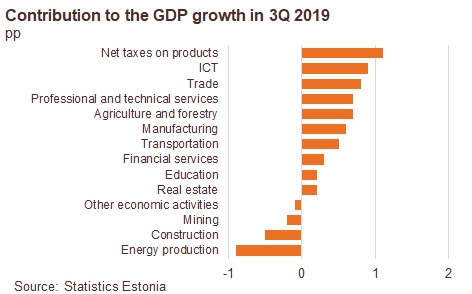 Export growth is expected to slow

In the context of the deteriorating external environment and sharply worsened economic sentiment in Estonia, the strong result of economic growth is surprising in a good way. However, we expect that the weakened foreign demand will limit export possibilities with the longer time lag. Industrial enterprises’ expectations have worsened and foreign demand is expected to weaken further in the short term – therefore we expect that export growth will slow.

Investments contributed the most to the strong domestic demand

The growth of domestic demand has accelerated in this year, contributed primarily by robust growth of investments. Gross fixed capital formation increased 8% y/y in the third quarter, supporter by robust investments made by non-financial corporations and households, while government sector investments contracted. Total investments have expanded 17% during the first three quarter of the year.

Private consumption growth has slowed. In the third quarter it increased only 1%, but this weak result came from the unusually higher base in the last year. Real growth of net wages has slowed sharply this year, which is why we expect deceleration of consumption growth this and next year. 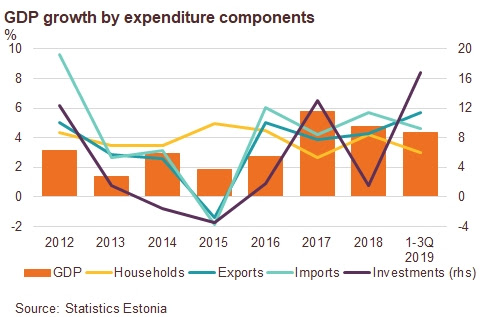 Estonian economy has expanded 4.3% in real terms in the first three quarters. Our recent forecast, published in the beginning of November, for the 2019 GDP growth was 3.2%. As the third quarter result was above our expectations, we will likely revise upwards this figure.