If the market overview of March already mentioned the impact of the emergency situation in the second half of the month, the statistics of April transactions was fully impacted by it. However, in the last week of the month, increased activity could be senses, which hopefully will have a positive influence on the next months, including the termination of the emergency situation.

The corona epidemic has hit all the real estate segments, but rather differently. The first blow was received by the short-term rental market which caused a larger movement into the long-term market. That, however, meant increased offering and price pressure in the rental market which brought along active price negotiations, resulting in a drop of rental prices in such premises by 20 to 30%. Last April, real estate portal KV.EE had 1,908 rental ads in Tallinn and 420 ads in Tartu; now, the relevant figures are 3,233 and 782. Lower interest in investment apartments can also be observed.

The number of transactions in the apartment market dropped by nearly 40% in comparison to the average figure of the previous 12 months; the market of private houses and summer houses dropped by over 20%, even though based on one month it is probably too soon to start speaking of the process of counterurbanisation. However, real estate agents all over Estonia have confirmed great interest of people in country houses, plots and summer houses; both the sales and rental markets are active. That may mean that, for instance, the apartment market may recover from the crisis less quickly than the market of houses.

Sales prices have remained stable all over Estonia, the bargaining margin is clearly more flexible but neither the statistics of new developments nor those of the secondary market show any trend of price decrease. Due to the conservative loan policy of banks and also because many build from their own funds, the liquidity of real estate developers is still very good today, and unless a project is supported by riskier mechanisms, there is still no big reason to worry. Stability of prices has kept the volume of sales offering stable as well. Probably many owners still maintain a hope to receive a price close to the top of the market instead of selling their real estate six months later with a considerable discount.

455 transactions were concluded in Tallinn, which was 44% less than the average of the previous 12 months. The drop in the number of transactions was rather similar both in the secondary market and the market of new developments, even though the reasons were different. A little over 300 transactions were concluded in the secondary market, i.e. 45% less than the average of the previous 12 months. However, as the transactions with new developments were mostly concluded before, we shall see greater statistical changes in this segment towards autumn. The drop in April mainly came from reduced volume. Based on the public offering, the market of new developments was also hit in April by a 40% drop in the number of transactions – instead of the previous 250 apartments about 150 apartments were sold. Stock absorption was therefore extended from less than 9 months to over 13 months. The median price of transactions was 1,992 €/m2, i.e. similar to the figure in March. The prices drop with a delay mainly due to the reduced demand, even though the transactions with typical apartments in suburb areas did not yet show any price drop in April. 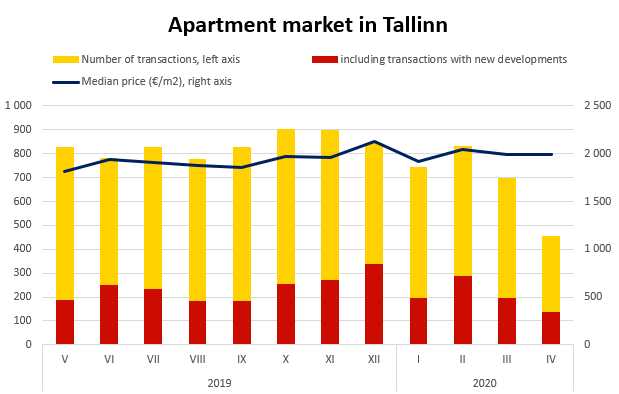 The median price of transactions, however, broke records in Tartu due to the 36% share of new developments, reaching nearly 1,600 €/m2. Price pressure can already be sensed, the new market situation should fully reach the statistics soonest in early autumn. 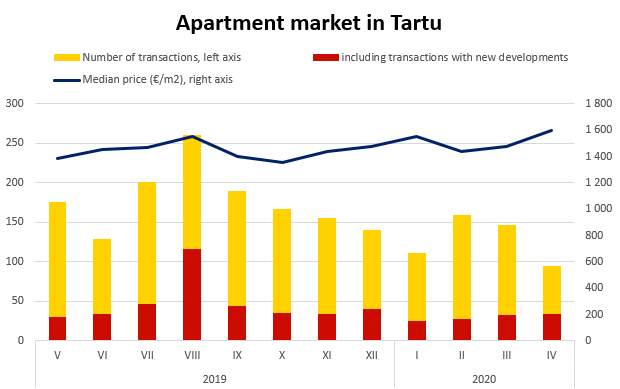 In April, 41 sales-purchase transactions were concluded in Pärnu, which was the lowest figure of the past five years. In comparison to the average of the past 12 months, the summer capital saw a nearly 50% drop in the number of transactions. The drop mainly came from the secondary market, as statistically the transactions with new developments mainly reflect previous transactions under the law of obligations. For instance, 69 secondary market transactions were concluded last April; this year, the figure was only 33. Similarly to the rest of regions, fewer changes could be observed in the median price of transactions; the figure in April was 1,125 €/m2. Pärnu is facing a rather complicated summer. Due to travel restrictions and reduced consumer confidence the short-term rental market has been hit hard, and also the traditionally strong tourism industry will have a tough time. 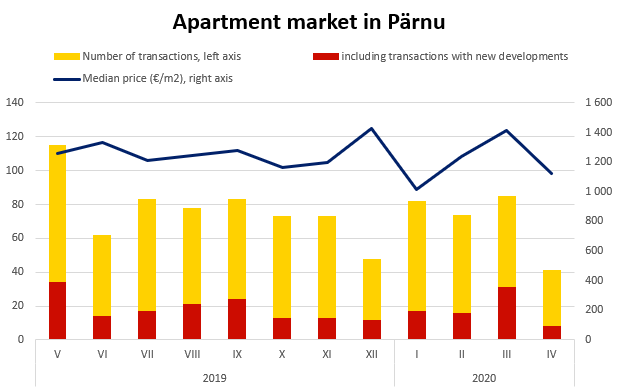 In comparison to the average of the previous 12 months, the market of Narva saw a somewhat lower, 32% drop in the number of transactions; 44 transactions were concluded. However, in comparison to last April, the market dropped already 40%, i.e. the drop was just as steep as in the rest of Estonia. As we know, March was still rather active (74 transactions). Therefore, the restrictions imposed later by Russia showed their full impact in April. Continued restrictions with Russia probably have a bigger impact on Narva than on the rest of Ida-Viru County, as the economy of Narva is more closely connected with the eastern neighbour. The last time with so few transactions was January 2018. However, the median price dropped in Narva by 5% in comparison to the previous 12 months – to 379 €/m2. Similarly to the rest of Estonia, the share of inquiries for country real estate has increased in Ida-Viru County. 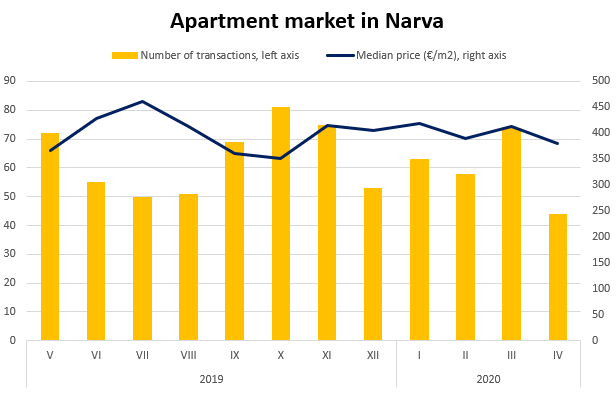