The growth of average gross wage accelerated to 7.6% in 2016. Net average wages grew rapidly too, by 7.5%, in real terms. The average full-time monthly gross wage was 1,146 euros in Estonia.

The rapid growth in the average wage is supported by a lack of suitable labour, a 10% increase in the minimum wage, a political agreement to raise the wages of teachers and healthcare workers, and strong domestic consumption that lifts the sales of enterprises selling their products and services in the domestic market. Irregular bonuses lifted the average wage growth by 0.4 percentage point last year. 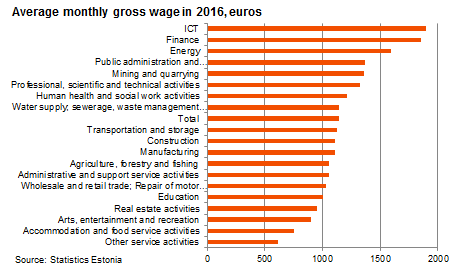 In 2016, average gross wages increased in all sectors, although growth rates varied substantially. Average wages and employment grew rapidly in the real estate and ICT sectors. Average wages also grew rapidly in agriculture, tourism, healthcare, and education, where employment grew little or even declined. Wage growth was modest in mining, which was hurt by low energy prices at the beginning of the year. 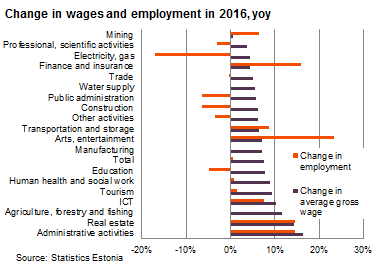 Too fast growth of labour costs could be dangerous in the longer term, as it reduces companies’ ability to export and invest. A rapid growth of labour costs could hamper the manufacturing sector the most as it is directly exposed to foreign competition. However, recent surveys suggest that, at least currently, the sentiment among the manufacturing sector is rather optimistic and entrepreneurs’ assessment of their export competitiveness has improved. As export orders and output prices are expected to increase this year, the profitability of the business sector, including the manufacturing industry, should improve in 2017.

In 2017, the growth of average wage is supported by another rise in the minimum wage (+9%). The government also plans to raise the wages of teachers, social workers and policemen. The growth of the average wage in real terms is expected to slow from above 7% in 2016 to around 2% in 2017, as nominal growth of wages will be somewhat slower and prices will rise. This, in turn, would limit households’ consumption. The substantially slower growth of wage-earners’ purchasing power will be smoothed by an increase in social transfers to pensioners, low-wage earners and children.