The unemployment rate fell from 5.7% in the third quarter to 5.2% in the fourth quarter. The survey-based data by Statistics Estonia somewhat underestimates the number of the unemployed, as the Unemployment Insurance Fund had 8,000 more people in their registry of the unemployed. 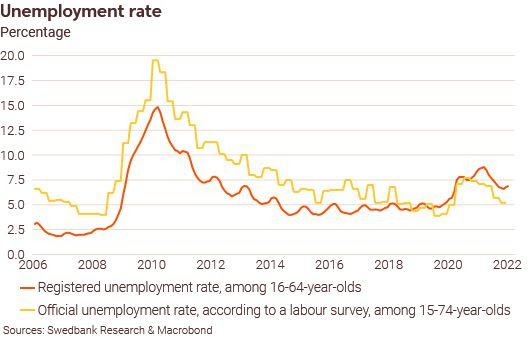 The number of the employed grew by 0.6%, over the year, in the fourth quarter. However, the number of jobs was still well below the pre-crisis level. The virus has wiped out many jobs from accommodation and catering, trade, entertainment, and transportation. In addition, the decline in employment in agriculture and manufacturing continued – a trend that began before the crisis. Employment increased in the financial sector, public administration, and education. According to Statistics Estonia, 16,000 Estonian residents worked abroad, slightly more than half of them in Finland.

Demand for new employees has increased significantly in both industry and services. The highest number of vacancies is found in education, trade, and industry. This year, the number of the employed is expected to increase and the unemployment rate should fall further. Labor shortages are most severe in construction. The labor shortages in the construction sector may worsen in the coming years when the construction of several EU-funded infrastructure projects will begin. 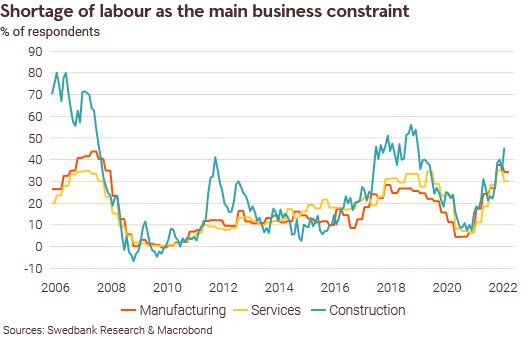 Labor shortages and rising minimum wages keep wage growth rapid. Swedbank estimates that the average net salary will increase by 6% this year. In recent months, the net salary of Swedbank’s customers has increased by 8 percent year-on-year. In addition to significant increases in material and energy prices, companies face strong wage pressures. However, industry’s assessment of its competitiveness is still good, as demand is strong and higher production costs can be passed on to customers.