Swedbank: Wage growth should ease in 2020

Wage growth remained relatively rapid and broad-based in the fourth quarter. Statistics Estonia’s wage data showed a slowdown in the annual growth rate of the full-time-equivalent average gross wage (+6.4%, over the year) in Q4 2019, mostly due to a high base effect of Q4 2018. Tax Authority’s data on the median wage showed a continuously rapid wage growth of +9.0%, over the year. The average inflation-adjusted net wage increased by 3.5%, over the year.

Wage growth in the public sector (education, health care, public administration) exceeded wage growth in the private sector. Private sector, exposed to global competition, has found it harder lifting its labour costs as rapidly. Among different sectors, the average wage was still the highest in the ICT and finance, which also saw solid growth rates in 2019. 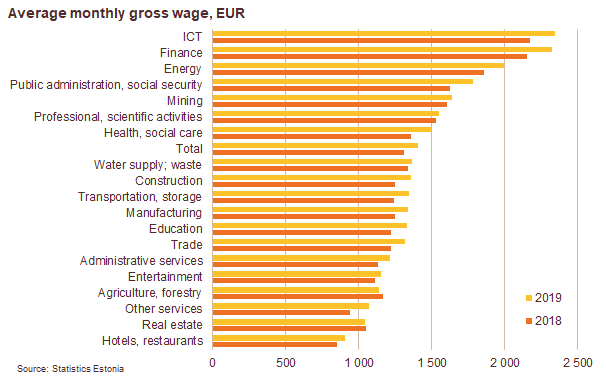 As export demand and Estonia’s economy are expected to grow at a slower pace this year, demand for labour should ease, at least in the exporting industry. So, wage growth should moderate, from very high levels (from 7.4% in 2019 to 6.5% in 2020 and 5.5% in 2021). Wage growth in the public sector should also soften, according to the 2020’s budget.